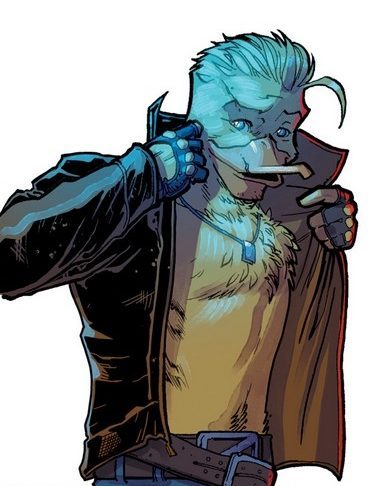 First Name: Drake
Middle Name/Initial: D
Last Name: Mallard
Epithet: "Duck"
Age: 27
Gender: Male
Race: Mink/Sky Islander
Faction: Undecided
Profession: Smugger/Navigator; Drake was taught from a young age how to navigate the harshest of seas and sail the tightest of passages. Sharpening his craft through the years and having been raised by scavengers and thieves, the hybrid has become known as a renowned smuggler, able to sail through any waters with any cargo without fear. Able to elude capture from the marines and a horrible death at the hands of pirates, just remember, always bet on Drake.

Physical Appearance  Drake's most striking feature is the fact that he resembles a humanoid duck, and by resemble I mean he is a humanoid duck. An abomination spawned from the unholy matrimony of a female mink and male sky islander. Standing approximately six feet tall with a lean athletic build, one that is completely covered in light blonde feathers, with slightly darker ones marking up the hair on his head. Keeping with his Sky lander heritage, the hybrid has a pair of large wings on his back, which are generally kept folded up and tucked away beneath his trademark leather jacket. He also has large orange webbed feet, and due to their size he is left unable to wear shoes, much to his dismay.

Keeping with his ''cool guy'' demeanor, Duck wears his hair feathers in a slicked back fashion, with a single strand hanging out of place over his forehead. He also has a fairly deep scar along the right side of his face, beginning at his hair line and extending down to his bill.

Hair Style: Slicked back
Hair Color: Blonde
Eye Color: blue
Scars: Facial scar
Clothing and Accessories: Duck is rarely ever seen without his trademark brown leather jacket, perfectly weathered and distressed. He wears a pair of dark blue jeans with the cuffs rolled up at the bottom and leather gun belt tilted to his left leg. The belt itself is a distressed brown, though darker than his coat, and is decorated with spare bullets and holsters an extremely well kept revolver. He also wears black fingerless gloves on his hands a metal locket around his neck.

Description: Six foot tall humanoid duck with an affinity for leather jackets, going fast, and rock and roll. He keeps a constant stubble along his beak and tends to wear a pair of glasses that look like he stole them straight of of the 90's (yes, you guessed it, og Oakley Razor Blades).

Hometown: Please read the island description of your home island provided in the Roleplay section of the forum. Some islands are a bit different to how you may remember them from canon, so it is imperative that you read it. However, you may choose to make up your own island instead also, in which case you may make up its history so long as it doesn't distort the overall history of the forum's plot.
Personality: Describe your personality in both combat and non-combat situations in detail. This doesn't necessarily mean your character must always act within the parameters of this personality, but it should provide a good background on how your character acts in various situations.