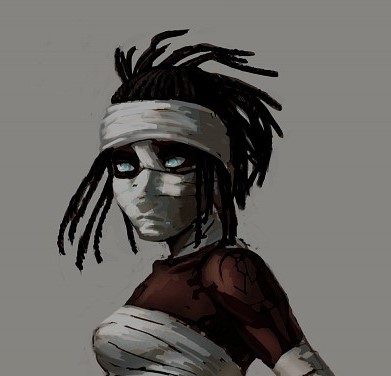 Hair Style: Zola has medium-length dreadlocks styled into a ponytail with a couple of dreads framing the sides of her face.
Hair Color: Black
Eye Color: Pale Blue
Scars: Underneath her numerous bandages, some of Zola's face and most of her body is completely covered in scarred skin. Due to personal reasons, she decided to keep these areas covered at all times.
Clothing and Accessories:

At first glance, Zola looks almost like a mummy straight from a crypt with most of her face and body wrapped around in bandages. The only area that isn't completely covered in it is her eyes, hair, and some parts of her torso and legs. Aside from the woman's bandaged appearance, she combines the look of a marine and a cowboy by wearing the standard white short-sleeved shirt, the navy's neckerchief and dark jeans with a brown duster worn over it. Usually, she dons on black thick gloves and strolls around in western-style boots. Hanging around her neck, a well-worn silvery looking necklace that has a pendant shaped similar to a star badge. An ammo belt is strapped across her hip that has a small hostler on the right and left side. Occasionally, she likes to put on her old white cattleman hat. Of course just like any marksman worth their salt, her weapons are always close by which consists of two trusty pistols secured on her waist and an assortment of other guns hidden within her coat.

Standing at around five foot ten inches, Zola possesses a lean and agile body. Beneath her white bandages, the gunslinger's natural complexion is swarthy and mostly covered in scarred tissue with the exceptions of a few parts of her face and hair, some of her upper torso, and a couple areas on her legs. Apart from the abundance of bandages that cover her body, the other most noticeable aspect about the marksman is her pale blue eyes that are usually focused and intense.

Unique laugh: Does your character have a unique laugh? Well, it should. (Seriously, you need one or you're banned for life! I'm totally serious! Like, really, really serious!)

Hometown: Olde West Island, West Blue
Personality: Describe your personality in both combat and non-combat situations in detail. This doesn't necessarily mean your character must always act within the parameters of this personality, but it should provide a good background on how your character acts in various situations.