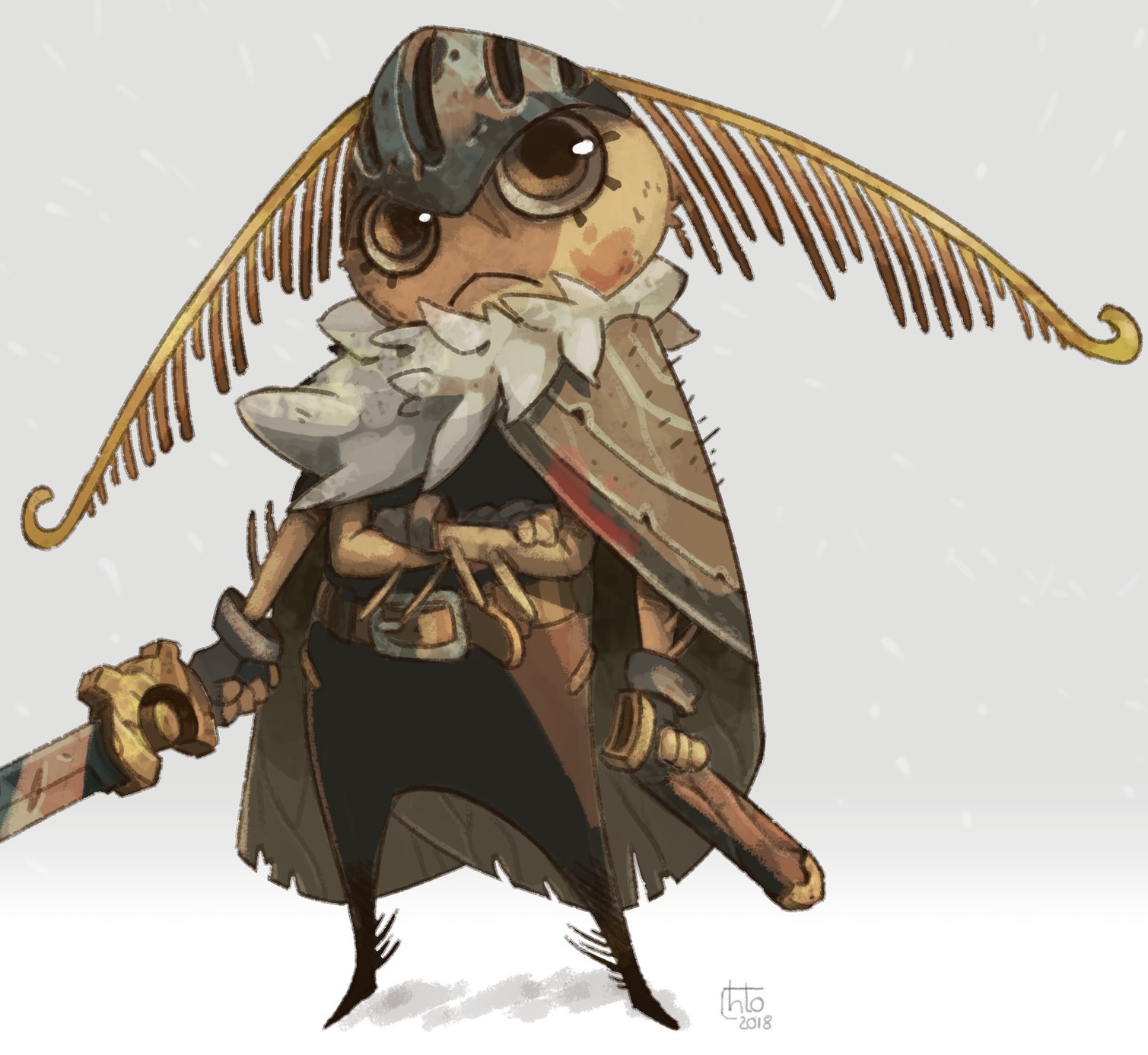 First Name: Cavatica
Middle Name/Initial: N/A
Last Name: N/A
Epithet: La Cucaracha (The Cockroach), Gun-toting Roach
Birthdate: 1807
Age: 22
Starting Bonus: Pocket Change
Gender: Female
Species/Race/Tribe: Longear Tribe
Faction: Marine
Profession:
Talented Marksman/Gunslinger - As a child, Cavatica handled guns and rifles for most of her life. She grew familiar with the acrid scent of gunpowder as she eventually developed a penchant for duel-wielding pistols. In her youth, it was often fun and games to show off her trick shots to others. However, her talent sharpened into a lethal skill in her later years.

Budding Gunsmith - Due to her fascination with guns, Cavatica took a liking to the inner workings of guns. However, her teachings are mainly self-taught, and most of her experimentations typically have some unintended side effects. Still, it doesn't stop her from tinkering with mechanical weaponry. Plus, she is showing steady improvement with her gunsmithing.

Hair Style: None. Cavatica has two long antennas that curl a little at the end with several spines extending from each of them. In her human form, her hair reaches the end of her chin, which is usually tied in a small low ponytail.
Hair Color: Light tannish "fuzz" with white fluffy-looking fur around the neck (Hybrid form) / Light brown (Human form)
Eye Color: Wood-brown
Scars: In her hybrid form, there are faded scars and chips on the chitin of her arms. A few of the spines on her antennas are broken or seemed to have been cut. And, a light reddish blotch on her left cheek. If she's in her human form, there is a couples slash-like scars along her arms. Her long pointed ears have cuts on its edges. She'll still possess the same scarring on her cheek.
Clothing and Accessories:
Regarding her attire, Cavatica prefers to don simple and comfortable clothing, giving her the most mobility. Typically, she wears a black sleeveless flex jumpsuit with small pockets that covers her torso and legs, and a small helm sits on top of her head. Situated around her neck, she wears a dark blue ascot. Dark fingerless gloves covers each of her hands. Around her waist, a coarse brown belt has four holsters, containing her signature pistols.

Description: Most of the time, Cavatica enjoys being in her hybrid form, feeling a lot more comfortable with herself in this state. Standing at four feet six inches, her hybrid body is covered in downy scales like certain moths, making it appear like she has light tannish fuzz. Contrasting the tan color, a puff of white fur surrounds her neck. Her wood-brown eyes are large, while three thick lashes are on the bottom of each eye. Her four arms have small, slender spines sprouting out of the forearms. Similar to her arms, her two legs have little spines extending out of her ankles. On her back, she has two furry-looking wings that have brown-white banded patterns.

Reverting back to her human form, Cavatica is a tanned young woman with light brown hair styled in a low ponytail. Her body is lean, standing at five feet nine inches. Notably, her scarred ears are long and pointed, hinting that she belongs to the Longear Tribe.

Personality: Describe your personality in both combat and non-combat situations in detail. This doesn't necessarily mean your character must always act within the parameters of this personality, but it should provide a good background on how your character acts in various situations.