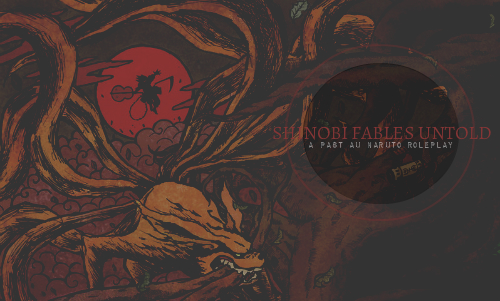 WELCOME TO THE WORLD OF SHINOBI FABLES: UNTOLD

| On SHINOBI FABLES: UNTOLD we like to manage a composed, open, and fun community where any shinobi is invited to become a vital part of the astounding plot that is actively amongst the site. On SFU we possess a system for just about every major aspect of NARUTO, and any shinobi who dares to step foot into its ALTERNATE UNIVERSE is free to mold or shape the future of their shinobi however they deem fit! The community of SFU cannot wait to see how any newcomer can change the dangerous world of SHINOBI FABLES: UNTOLD!

| The setting of SHINBOI FABLES: UNTOLD takes place in the past, therefore, SFU does not allow canon. In this alternate universe, the heroic NARUTO has yet to be birthed, and the superior FIRST HOKAGE is yet to reign. SFU welcomes all to rewrite the past with its community, and to make oneself a legend; for, legend's are not born, they are made.
| ABOUT THE SITE: |

☰ On SFU there are many systems that enable the creation of all manor of techniques. In addition, the systems allow for a balanced stat system where power is measurable, but is not the final decider in combat!

☰ SFU enables all styles of fighting to flourish because of an exceptional skill system. It contains a phenomenal taijutsu and genjutsu system that enables these fighting styles to be what they are in the anime, and not nerfed to the point of being useless.

☰ Every clan has a powerful KKG worth having, as well as a story worth being a part of. SFU carries royal clans that rule their nations, and banner clans that thrive within the same nation as well. Each land is filled with the most legendary and popular KKG made to their fullest potential.

☰ SFU is set in an alternate timeline of the ancient era where there are custom kingdoms, and much of the world is awaiting discovery and domination! Interactive and unique story plot that is continued by the IC actions of players; and unique and relevant events released by staff regularly.

☰ SFU encourages and rewards CHARACTER DEVELOPMENT with unique its REWARD SYSTEM that enables the purchase of legendary weapons, stats, skill points, and special perks that are beyond one's wildest dreams.

☰ SFU enables CLAN PC armies, upgrades and a system that allows clans to receive benefits from misisons and activities. This includes purchasing a wall, hospital, temple, training ground, and much more.

☰ SFU is a site, more than any other site, that allows its players to work and become all that they have ever dreamed their character to be. On SHINOBI FABLES: UNTOLD there is no bias within its trustworthy staff, the systems are very open to enabling raw power, yet balanced so power is respected; and more than anything SFU contains a warm community that believes in the value of each character's story and the impact they make on the site alongside other players.
ARE YOU A SHINOBI WHO IS READY TO CHANGE THE WORLD?