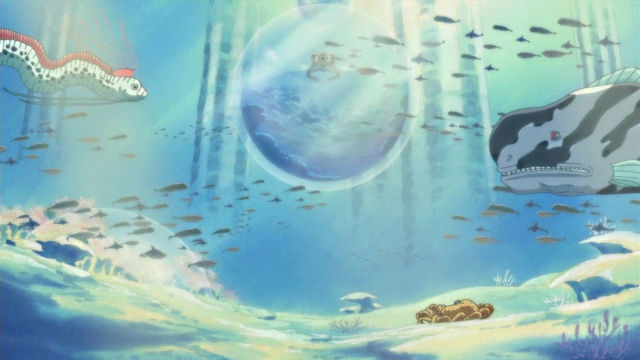 Owner: Ryugu Kingdom / White Saint
Status: Uncontested
Economy: 22
Description: Fishman Island is the home of the fishmen and merfolk. It is located 10,000 meters below sea level in a giant hole that goes under the Red Line at the bottom of a deep trench. The island resides in a giant double-layered bubble floating above the sea floor, seemingly filled with about half water and reef and half air. Ryugu Palace rests in a smaller bubble on top of the main island's bubble. It is illuminated by the Sunlight Tree Eve. It serves as an underwater gateway to the New World for those who do not wish to cross over the Red Line above.

Fishman Island falls under the territory of the Ryugu Kingdom, ruled by the Fairy family. The King, Fairy Akheilos Aegeon, is a Killer-Whale Merman who has 13 children. Four children, two sons and two daughters, were born to his first wife, a mermaid who died in childbirth during the birth of a fifth child—a stillborn. Four daughters and two sons were from his second wife, a fishwoman who died under mysterious circumstances. And three children were from the last wife—also a fishwoman— who birthed two sons and a daughter.

They are a family that is generally welcoming of the traffic of other races that passes through their domain and is actively seeking alliances with humans in order to improve the conditions for fishmen on the surface world. For the past six years, Fishman Island has been under the protection of one of the Yonkou—White Saint.

The youngest of the thirteen children, a mermaid princess, passed away in a foreign country on the surface world. The reason of her death was not disclosed to the public. And it is said that two princes have gone missing or have been banished secretively, their lack of presence in the royal court having been noted by many members of the ancient Ammo Knights Order who can't help but gossip. With a growing power struggle between princes born of different queens, the royal family has hit turbulent times, facing many stressful challenges in their rule.