Centaurea: Nothing is left of the once proud kingdom. Everywhere are ruins and the pirates seized the whole island. Here one could find legendary weapons or could sell them on the black markets. This place is known as the hometown of the pirate twins Mad Silver and One-Ear Turner. The marine posted their bounty for certain reasons. Apparently, they destroyed years ago a small village in the east blue. It was located nearby Shimotsuki Village. But nobody could say if the rumour are true. If this should be so, they were the murderer of young woman called Junko. Hunting the murderer of her parents, the girl decided to follow up this rumour. The bounty hunter, who was new in the business and didn't have even a ship hitched a ride to get finally on Centaurea.

Junko took a seat on a rock at the beach and stared at the wanted posters. This was her first bounty hunt and she was a bit nervous. These guys are stronger than normal people and so it would be an interesting fight. She had to win this to get the information she needed: The truth about her destroyed hometown.
Mitsume put the posters on the ground and took her scythe from the back. In her hands Katto felt wonderfully light. She examined the blades to see if there were still keen. She knew exactly that there were sharp, but it was her daily routine.

Out of nowhere, a stranger appeared behind her „Hey little girl, looking for mommy and daddy?“ he asked with a laughter.
She throws her head back and looked up at the man behind her. It was a big bolted muscle man, who seemingly didn't notice Katto on her lap. His upper body was protected by heavy armour and in his hands, he held a warhammer
„Just gimme all your money and food and I will probably let you live!“
Faster than the pirate could follow with his eyes, Junko jumped off the rock and slit his back. With a loud scream, the enemy stumbled forwards. Before he could do anything Junko sliced through his armour due to the manufacture of the scythe-blade. The scythe was made by Junko, of course, it was high-quality. The blacksmith did a very good job with the scythe. The pirate fell unconscious to the ground and sand were whipped up.
„Mmh. I should have to ask him first about the twins.“ the short woman emitted emotionless.

She didn't know exactly where she should search for them, but she knew about the black markets on the island.
When the bounty hunter arrived at the first black market, she asked the traders and pirates about the twins. Unsuspecting that they are already there.

„I heard that you are looking for us, lil girl?“

OOC:
*prays to every god available that I'm doing this right* 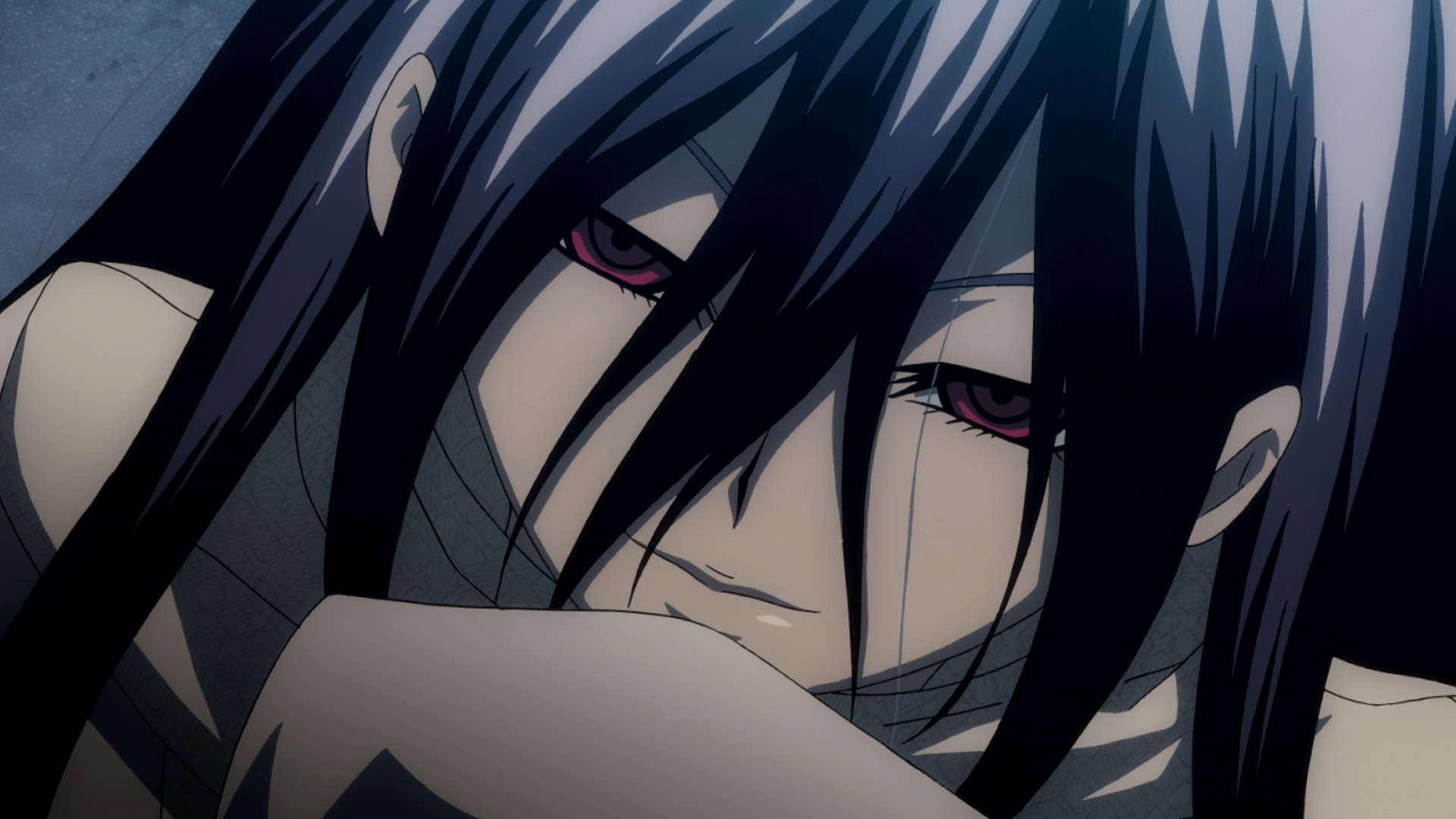 The member 'Frenzy' has done the following action : Dices roll

Reflex check:
for Junko and this pirate

i hope i do this right:
hoping for good rolls

The member 'Junko' has done the following action : Dices roll

Charging with full force on them, Junko didnt realize the sniper aiming on them.
She was looking forward to the fight against the two. Nothing could stop her now.  The blue-haired girl yelled to bring herself to ecstasy.

At this moment, her strength increased significantly, but she didn't pay attention to her defence anymore. Her attacks would hurt and so she had to finish the fight fast. Before she reached the first twin a shot was fired and she stopped. The scythe-fighter didn't see that someone pulled a gun.
She was uninjured, and the faces of the twins registered also surprise. She used this short time to look closer at the two.
Compared to Junko, the twins were gigantic. In front of her stood, as it seemed, One-Ear-Turner... Actually not as it seemed. This pirate had two ears, but only one eye. His hand rested on the pistol at his waist. Behind him, Mad Silver held his shoulder. Blood ran down his spine through his fingers. The bullet must have hit him, but the marksman was still unclear.
Mad Silver didn't notice Junko any longer and went in the direction of fire for his revenge. She could look after him and this marksman later. So fate, for once, was on her team when she could fight them one on one. Without further hesitation, she dashed across the place.
With her first attack, she aimed for his leg. One-Ear was astounded to discover how fast the small girl overcame the distance. He made a sidestep to dodge this attack, but at this moment Junko spun her scythe against the other direction and hit the other leg with the handle. The “giant” began to stumble and fell slowly to the ground. She gave him no time to breathe and pursued him with her scythe Katto.

Suddenly some other pirates on horses appeared. “Captain, are you ok?”
The horses kicked up dust and Junko couldn't see that much. She retreated a few steps and tried to gain an overview.
“There are two of them! We move back. Help my brother!” One Ear ordered his crew. He sat upon a horse and “ licked” his wounds. The man with only one eye was mad about the little bounty hunter. The sawn-off shotgun in his hand, he aimed at the clueless girl. The pirate dug his spurs into the horse and at the same time he shot at Junko

The pellets hit her in the right waist. “Next time you wouldn't hit your attack” As he rode by he tried to hit her with his shotgun again. But not in a shooting way. He held the gun like a scimitar. This time Junko was cool, calm and collected and prepared to retaliate. They managed it to strike each other at the same time, but after all, he and his crew rode away and led her back.
Her waist still bled, but she faded out the pain. „Thats unlucky“ she spoke to herself „Mmh... maybe the silver hair guy is still there.“
She turned on a dime in the direction of the other fight.

Unhinge:
Technique Level: 1
Technique Range: 5 m
Technique Cooldown: 2 posts
Technique Description: She fakes an attack on the legs from the side. As soon as the enemy wants to react she stops this fake attack and spins her scythe against the other direction. To hit the legs with the handle will throw him down. The moment he falls Junko follows with a cut over the belly.

The member 'Frenzy' has done the following action : Dices roll

From the far Fran looked unwieldy in her wheelchair. Some dust in the air and she couldn’t fight. After the brothers escaped, the two huntressses stand their alone, except some other people, who were just watching.
Fran said that she wanted to fight the Turners alone and started to roll away in the wheelchair.
Junko looked at her and did an incredulous shake of the head. Did this wheelchair-woman say, that she should stay behind? Alone against the twin brothers? Junko snorted.
“Calm down, Honey.” Junko used her scythe like a stick to block the wheels. “Do you think a woman in a wheelchair can keep up with two wanted pirates? Are you even a bounty hunter or just crazy?” The blue-haired woman went in front of Fran and inspected her. Due to her small appearance, she had to crouch down to be at the same height with Fran’s eyes. “This is a bit too hard for you. So do yourself a pleasure and stay behind” Junko removed her scythe and went in the direction of the twins retreat. She didn’t think that they would escape from the island before fighting her again, but she had to figure out where the twins had their hideout.
Some innocent people were still watching her. The bounty huntress went to an old woman, who didn’t look like a pirate.
“Hey granny, do you know something about these twin brothers, which escaped. They are wanted pirates.” The old woman supported herself on her wood walking stick and looked at Junko.
“Oh my, dear, you are finally back. Did you brought me my eggs?”
“What?” Junko asked surprised, but the senile woman was still smiling.
She decided to ignore her and tried to rely on her luck.
As she turned over the last time she saw how Fran tried to make up ground.
“What do you still want?”  Junko said annoyed. “I doubt that you are wheely good at this.”