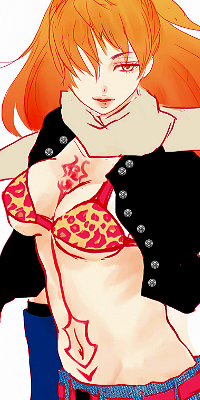 Hair Style: High ponytail
Hair Color: Red, blonde highlights
Eye Color: Grey
Scars: N/A
Clothing and Accessories: E’s preference for fashion is typically “revealing,” to say the least. Rather than shirts, her midriff and a fair bit more is flaunted by string-bikinis, the style and colour prone to changing. The jacket thrown over the top however does not. Jet-black, high-collared, sleeves rolled-back to her elbows and each silver flame-inscribed button undone. She tends to alternate between low-waisted and snug-fitting denim jeans and similarly styled denim shorts with thigh-high electric-pink tights/socks, her boots flat, dark and heavily buckled. Stretching from her right knuckles to her elbow is a two-padded layer glove, and she always accessorizes her throat with either a scarf or a thickly-secured bow.

Description: E is tall and slender, toned and lean of muscle, though what tends to draw the eye is the curvaceousness of her hipbones and the heavy swell of her breasts, accentuated by her choice in clothing and by the crimson “patterns” beginning above her cleavage only to stretch down to her naval. Although, a closer inspection would prove that they aren’t quite patterns at all.

Her skin is quite fair, free of any scarring, freckles or other imperfections. She tends to allow the bangs of her fiery hair to fall heavier across the right side of her face, obscuring her right eye. Her face is quite feminine of shape and features, with her lips being particularly plushy. Against the left-side of her throat is pale ink tattooed into the shape of a butterfly, however E always keeps the tattoo hidden from sight.

Hometown: East Blue, Mirrorball Island
Personality: Describe your personality in both combat and non-combat situations in detail. This doesn't necessarily mean your character must always act within the parameters of this personality, but it should provide a good background on how your character acts in various situations.

History:
Zel Bathory was her father – not her biological father, nor the birth father of her two siblings, and they weren’t her biological siblings either, though for most of her childhood Zel had deliberately allowed the three to believe otherwise. She was the second oldest, the middle-child, and so he named her “E,” giving the older the name “Z” and the younger “L.” They were all quite young, children still, when Zel put them to work within what he had called the “family business,” a small bar/restaurant within Mirrorball Island. Both Z and L were told to be servers, to clean tables, set tables, take orders and carry said orders out from the back kitchen. Zel encouraged them both to make conversation with the customers, to listen to their conversations and gossip and to tell him what they judged to be “useful” or “interesting.” E however he kept in the kitchen with himself.

At first he only had her washing dishes and peeling vegetables with the smallest of knives, but he was a harsh taskmaster with that knife. He expected her to use it “just so,” and any disappointment was met with admonishment, sometimes verbally and other times physically. E, at first, hated working beside her father but, eventually, picked up that impressing him would mean he’d reward her with praise and a new larger and sharper knife. It was a bit like a game. And by thirteen, Zel had her learning not just how to handle knives but axes and swords too, their usefulness outside of a kitchen.

Zel wasn’t a cold or distant father – but he encouraged competition between the three, rivalry, jealousy. Clashing for his favouritism. And, as E was so often at their father’s side, both Z and L tended to team-up against her.