BY RIMY :hearts: OF BTN 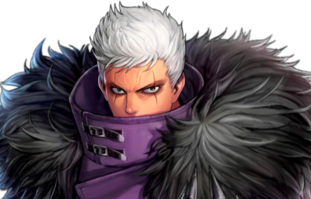 OOC: (-eh is a cough; -ee is a weeze)
The brooding Brood's brood found themselves tucked away on yet another stop during their grand voyage throughout paradise. It was starting to become a bit of a joke really, how often the crew made pit stops well off the beaten path. It was as if they had a log pose that was completely and utterly broken. To that end, it was no secret that a man such as Brood was completely negative when he observed his crew doing little other than slacking off. Drinking and being merry as though this was some vacation cruise, some sort of carousing cathedral across the seas catering to all manner of ill repute. It was despicable. Perhaps that was why he didn't spend much time with this newer crew composition.

He spent a great deal of time to himself lately. Not because he was depressed by the loss of those whom he deemed to be family, but due to the fact that none of his crew seemed to understand the reason that they all sailed in the first place. To purify the seas of those whom would oppress and impress upon the will of others. He wanted to use tyranny to fight tyranny. To use his overwhelming strength to crush the lights of hope that burned brightly in the hearts of evil men. If that meant that a few several hundreds of thousands of people had to die for him to feel as though he purified the seas, so be it. He enjoyed what he did, but it seemed that now-a-days he just attracted losers left and right.

A few select individuals stood out of course. Certain new hires that showcased promise and were likely to fill the spots of the ones he lost. But they had yet to make any impact on the team...and he wasn't so blind that he'd trust in the skills of unproven nobodies. The only one worth trusting was Wren, his daughter. She was someone that meant everything to Brood and his need to protect her grew far beyond that of mere friendship. She was the only piece of family he had left. The last of the old guard and to that end, he wanted nothing more than to keep her out of trouble...by making her so strong and viscous that people wouldn't want to approach her at all. Perhaps that was why he was the way he had become now.

Almost instantly the muscular male found his eyes ripping open from their shut position. He had not been asleep, but he had been sitting in his chambers with his legs folded over each other. A heavy dose of steam filling the room as per usual so that the male could breath without being hindered by the sugar that ruminated so strongly within his body. He'd glare towards the door, his crossed over legs unfolding as he placed the bottoms of his feet against the strained wood from within his sauna-like cabin. He'd raise himself upwards, moving over towards the vents and closing their tops with the wooden barrel lids that he kept propped up against the walls. As the steam subsided in the room, he grimaced.

Irritated beyond belief, the male would make his way to an enclosed space, a hole in the wall, that acted like a closet for the male...preparing himself for today's festivities as he reached the door. With great strength he pulled the door back, noting it's loosened hinges now that Wren had beaten the construct within an inch of it's non-life. His eyes narrowed even further now, before a smirk ran across his face. Due to being in the steamed room, his voice had yet to become strained by the sugar that constantly filled his throat. "Yes, yes. Go get your shit together. We are going to slowly recruit more people into the crew, hopefully whomever we get here isn't a complete waste of space."

He spoke with a haughty expression on his face, eyes lifting up from the female and down the hallway. To onlookers, they may have been surprised at his lack of reaction to her newfound form...but it was not because he hadn't noticed it. Rather, he was already so annoyed by her actions that anything else that she could have done would just come off as childish to the man. He'd rub the side of his jaw briefly, peering over towards his wee lass and placing his hand atop of her head, squeezing it and lifting her up off her feet by the head. Looking at her in the eye for a moment. "Stop fucking around...Eh."  He grinned as he dropped her, heading towards the front of the ship at a brisk pace. Today was the day. The day of reconstruction.