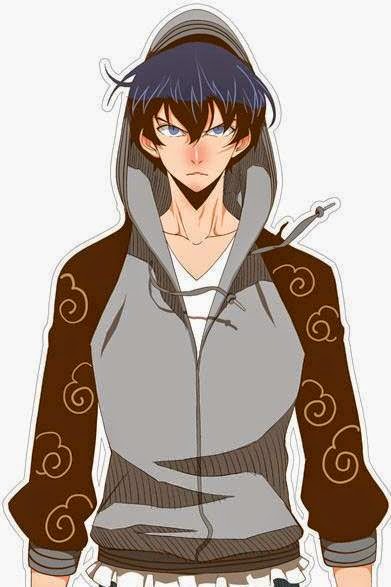 Hair Style: Unkempt Hoodie Hair! Drives the ladies wild!
Hair Color: Black
Eye Color: Dark Blue
Scars: Long diagonal thin scar from his left pectoral to his right stomach
Clothing and Accessories:
Silas' clothing is just like him, lazily put together. Most who see him tend to think he just picked up whatever was on the floor. When on duty he wears his naval uniform, usually covered in wrinkles. Not only that various different adornments are in the wrong places such as the neck scarf around his wrist instead of his shirt collar. Though most of these violations of dress codes is covered by his favorite hoodie that he always wears.

Now lets talk about his favorite hoodie. This particular hoodie that has earned Silas favors is a grey jacket with black sleeves. This jacket is designed with a grey tiger with white eyes on his back. His sleeves are lined with a white outline of clouds.

When he isn't on duty, the young marine tends to wear a long white T-shirt whose end pokes out from under his jacket and a pair of long jeans which tend to drag on the ground. In combat his attire doesn't change much only that his pants legs are often rolled up to not get in the way of fighting.

Description:
Silas is an average man. His height standing at no more than 5' 8". His weight is 187lbs. Silas hair is unkempt and his face is average. He is so average in fact that no one might notice him in a crowd. Also doesn't help that he tends to have a rather bored or deadpan stare wherever he goes that is outside of battle.

His body is not much to talk about especially when compared to other marines. His muscles are well packed and firm but no different than any other marine. Only notable feature is the long scar that he has on his chest. This thin scar is from his left pectoral to the right side of his lower stomach.

Hometown: Please read the island description of your home island provided in the Roleplay section of the forum. Some islands are a bit different to how you may remember them from canon, so it is imperative that you read it. However, you may choose to make up your own island instead also, in which case you may make up its history so long as it doesn't distort the overall history of the forum's plot.
Personality: Describe your personality in both combat and non-combat situations in detail. This doesn't necessarily mean your character must always act within the parameters of this personality, but it should provide a good background on how your character acts in various situations.