[Episode] Is that man salty cause he's made of salt?

[Episode] Is that man salty cause he's made of salt?

Summary: The coastal town of Port Artor has fallen under the wicked clutches of its many criminal enterprises, and the corrupt nature of many of the officers of the 45th Marine Branch only serves to aid the villains. Three polar personalities (or four) find themselves weaving into each others' adventures by choice or by coincidence. An ingenuous law enforcer, an avaricious medicine man, and a doting babysitter (along with his custody) will foil, expedite, and/or ignore a substantial illegal arms deal promising to change the island's criminal landscape.

A hair-raising crackle in the grey sky drew a delighted squeak from a small voice. "KYAAAAA~!!" The pygmy lass flung her arms out with her baby fingers spread wide. If it were not for the steady grip of her carrier, she surely would've tipped over backwards. She swiftly balanced herself with a possessive grip on her mount's ears.

"Ish unna waaaiiiin, Gway-papa~~!!!!" The girl exclaimed in a nasal sing-song voice. Her pitch was high as if infected by a cold, yet honeyed like a canary in spring. Gray—the bear-like man serving as her vehicle—twisted his head up just enough to look at the straddler without knocking her off. His long orange-brown hair curtained down to his shoulders and had many poppy red cherries tied to its strands like Christmas tree baubles. "That's right~! You like rain, don't you, Merry-chan~?"

"You betcha, punchkin! We'll catch as many rain beetles as you can fill in that little jar of yours." Gray hummed a cheerful ancient rhyme ambling along a soon-to-be-wet cobbled street. Showing off a billion-berry-smile, Merry flailed her head side-to-side in rhythm and occasionally mumbled nonsensical words with the chorus.

After the umpteenth threat made by thunder, a woeful downpour cursed the dingy town of Port Artor. Street vendors had prepared shelters of varying quality, perhaps representative of what they could afford.

Activity in the market had slowed to a crawl. Stranded shoppers hurried to the eaves of the low buildings flanking the road to avoid soaking to the bone. Gray and his spirited ward were unfazed by the torrent. Pellets of water struck an invisible shield an inch above their skin and rolled off without touching a hair. Motherly bystanders murmured in judgment when they noticed the unkempt cyborg carry around his young pup through the rain with not a care in the world.

Merry plucked two cherries off of Gray's ginger hair locks. She mouthed one herself and reached around the giant's face to hold the other above his lips. Gray obediently accepted the offering like a dog eating off his owner's palm.

The ox and the little calf wandered through the town until they found a park suited for a bug hunt. This piece of open green land was hidden away within a den of misery and depression. The buildings nearby were decrepit, and the roads neglected. The few folks who lingered in the vicinity looked more suspicious than an elephant playing possum.

The pair's buggy enterprise blinded them to the dubious nature of their surroundings. Their one-track-minds guided their hunt for the elusive rain beetles. Merry darted from one bush to another, shouting an off-key rain song. The rope belt tied like a butterfly behind her bounced like a tail with each step. She screeched whenever she mistook a cockroach, acorn, or human litter for a beetle.

Gray pursued her lazily until her bottomless energy drained him into resigning. A shoddy bench served as his temporary relief—even if it was ill-suited for ten feet and a thousand pounds of muscle and metal. He shuttered his weary eyelids and allowed a few rain droplets to cool them a little. He cleared his mind and let the distant sounds of the city fill the vacancy.

Port Artor was one of the more famous coastal cities of Ilusia Kingdom. A stone's throw away (at least a stone's throw away for Gray) from this trade port was the 45th Marine Branch. Even after the recent alleged NRA assault on Lumina Bridge, the increased Marine presence had failed to polish (police?) the lawless face of the Ilusian coin. The disreputable denizens of the island leverage the corrupt nature of the marine officers stationed there. And from what he had heard, even the royal family of the kingdom could be counted among that lot.

Meanwhile, his charge had fled the confines of the park in search of one thing or another. 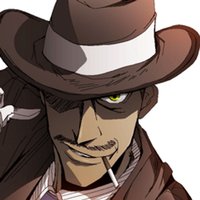 Re: [Episode] Is that man salty cause he's made of salt?

Whistling winds pushed a modest passenger ship to the harbor, away from the roiling seas. Seasoned sailors went to welcome the vessel in the appropriate manner. The sails were rolled up, the ropes were secured and the walkway was plopped against the cold stone. Soon a stream of colorful travelers stepped ashore. Their idle chatter filled the air. Young and old, odd and plain, fancy and subdued... It was a human rainbow in many ways. Between the so many new faces and outfits, one could easily get lost in the crowd.

Some preferred it that way.

Among the passengers strutted a dapper fellow in a chocolate-colored suit, lugging a bulky suitcase that looked comical next to his lanky frame. Sickly green eyes scanned the surroundings carefully. A deep breath filled his lungs with fresh air. Aah... Port Artor. The shining seaside jewel of the illustrious Ilusia Kingdom! ...Or something equally pretentious. He didn’t read the tourist pamphlet all that closely. Nor did he care, frankly. He didn’t come all the way here to sightsee, you know... After narrowly escaping Las Camp, which was a story he would rather not reminisce, he had decided to take it easy for a while. Keep it simple. Stick to what he knew. Smuggling weapons and illicit substance was basically a vacation compared to... that other place... The mere thought made him shudder.

A sudden crackle snapped the crook out of his pondering. He directed a quizzical glance upwards. The gray curtain loomed over the city like a bad omen. Somewhere in the distance, a flash heralded a deep rumble. His gaze narrowed. “Don’t you dare...” He muttered under his breath, a tired plea to the heavens. But, as any traveler knew, Mother Nature would and did dare. As if out of pure spite, the heavens responded by opening the floodgates. Heavy downpour whipped the rat as he scurried along the wet streets. Luckily there weren’t many people present, because the bitter things that he grumbled to himself were not appropriate for children.

After a mad dash through the city, the rat finally found some shelter at the edge of a particular park. He was naturally drawn to the decrepit and dubious scenery. This was the kind of places where nobody asked too many questions. If they knew what was good for them. He snuck into a lonely, little shack. Empty. Lonely. Barely four walls and a roof, slightly slanted to the side. Only once the rain stopped drumming his back he finally stopped running. Slouching against the wall, he wheezed weakly. His lungs protested against this foul torture called exercise. Shaky fingers dug out a pack of cancer in stick form. One was propped between his lips. A lighter was brought next to it. Click... Click, click click... His hand drooped with a heavy sigh.

Soaked to the core...

The suspicious silhouette set down his suitcase. With a pair of clicks, the twin locks opened. He rummaged around until he found his trusty burner. Gas needed but a spark... An orange flame flickered, filling the shack with wavering light. He set a tripod above the burner and continued rummaging. Usually his hot-headed companion was meant to heat up chemicals, but every now and then it got to pretend that it was a tiny stove. He dug up a cold can. Zeff's Pork & Beans, the label proudly declared. He gagged a little as he got the lid open and the pungent smell stabbed his nose. Eugh... Well... At least it was quick, cheap and filling. Three out of four wasn’t bad, as far as meeting requirements went. The can was unceremoniously plopped onto the tripod. A real chef would’ve shaken their head at the arrangement.

Leaving the beans alone for the moment, the crook set aside his hat and removed his coat. Gently he started to squeeze the excess water out of his clothing. Couldn’t wring silk, you know. It left creases at best and tore the fibers at worst. Little by little the droplets pooled at his feet. Next he snatched a comb from his pocket. It was essential to look at least somewhat presentable for the upcoming meeting. First impressions could make or break a deal. His wandering eyes searched for any sort of mirror, until they found the cracked glass pane of a window. It would do. While the rat groomed his whiskers and fur, the scent of warm food started drifting in the air.
________________________________________________________
Wanted Dead or Alive: Richard 'Plague Rat' Maxwell