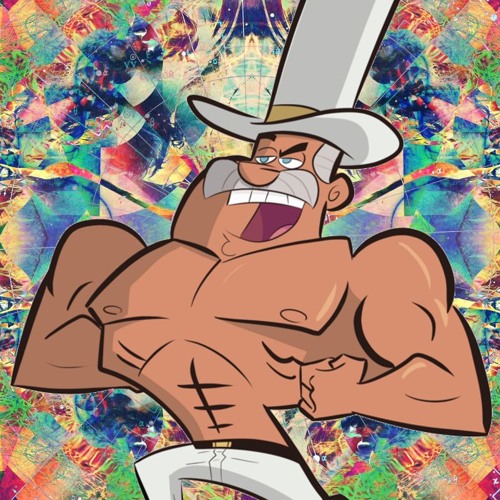 Height: 5'3" (Hat varies, but is generally three feet tall when not showing off or in combat)
Weight: 228 lbs

Hair Style: Swept-back undercut (Cable haircut)
Hair Color: Silver (dyed, naturally black)
Eye Color: Blue
Scars: None
Clothing and Accessories: Lux Lumisphere tends to stand out in a crowd, everything about him being bright.  His clothes are all pristine white, with some black and metallic in his accessories.  His coat is white, made from his own wax, dangling with tassels.  On close inspection, his tassels could be identified as candle wicks.  While they're typically not lit, he will light them in battle, and if he gets too excited sometimes his coat melts off leaving him topless.  Fortunately, his pants are woven from a rare kind of aerophobic asbestos, which cannot be inhaled and thus is not linked with the lung cancer known as mesothelioma.

His belt and boots are both made of black leather, the former with a golden buckle and the latter with silver spurs. Of course, the piece of attire that stands out the most, and the one which tends to draw the greatest amount of attention, is the 10-gallon hat on his head.  The brim has the typical curl of such a hat, and the golden band at it's base isn't anything to write home about.  The most remarkable feature is that it rises up three feet from the man's head, and at the top is a ridge of melted wax below a large, flickering flame.  The total effect of his image is that of a walking candle, with the man below it merely the candlestick.

Description: Lex is a short man, coming in below average at 5'3".  His short statue has never bothered him, however, even less now that he has his devil fruit.  He is a very stocky man, carrying the majority of mass in his upper-body. When not in combat or overly excited, he appears to be barrel-shaped and has a bit of a gut.  When he gets serious, though, his muscles tense and his chest and arms reveal that they are quite muscular, the kind of bulky, solid muscle meant more to keep a himself together than to take another man apart.

History:
Lex was born the first and only son of the fabulously wealthy Lumispheres, a couple of business dealers that owned most of the business in Luxville and a great many more across the island of Kyndaheim, with not-insignificant holdings abroad.  Their true magnum opus, however, was their eponymous arena, the Luxville Lumisphere, where fabulous sports events, fights, plays, and musicals were performed.  Visitors came from far and wide to see these spectacles, and so the Lumisphere name was well-know.  Deals were made in VIP Booths, and thus the Lumisphere name was well-connected.

Life was good for Lex, who had a naturally easy-going personality that made him easy to get along with.  While he was clearly spoiled, he wasn't overly snobbish, just a bit full of himself.  A sort of pride in his birthright that was easy for people to give a pass on, given how amiable he was otherwise.  He was something of a local celebrity, appreciated by a public he personally interacted with far more often than his very busy parents, who's facetime was only spared for mass appearances and the elite.

Kyndaheim was known as the Island of Lights, and its capitol of Luxville lived up to the name.  Day or night, rain or shine, the city glowed with glorious luminescence.  Torchlight next to electrical, candles in windows and bonfires in the square, it shone on the map as a dazzling place.  The Lumidome, crown jewel of the capital, even more so.  It's inside was so dazzling that people had to wear sunglasses inside just to see it.  It was Lex's pride and joy, and his entire boyhood he spent dreaming of the day when his parents would pass the matter of its management to him.

Sadly, nothing so good could endure forever.  One day, some marines showed up to the island.  A rather pushy commander of some sort went and ordered the Island's governor to pay tribute to the World Government.  At first he was ecstatic, believing that the World Government had finally recognized their island, that they would grant a title of Kingship to its ruler and a voice at Mariejois.  His hopes, however, were swiftly dashed.  There would be no title, the commander explained, no seat, no vote.  Nor would their be marine protection or communications services.

When asked why they should pay tribute for nothing in return, the commander explained in simple terms.  Maps had been drawn, Luxville was in World Government water.  The island must pay for the very right to exist in such a place.  If they did not pay, it was the duty of the marines to declare the island as renegade and take military action.  In such a case, he made certain to say, all assets, private and public, would be seized by the World Government.  The islanders, as they were, would have the entire island stolen from underneath them.

Believing there was no other way, the Lumispheres stepped in and supplemented the meager available municipal funds.  Normally, this would not have been too great of a loss for such a wealthy family, but they had recently begun expanding aggressively and had very little in the way of liquid wealth.  They were forced to cease expanding, to abandon expensive projects abroad where they stood, just to maintain their cashflow.

The Lumispheres never recovered from this blow.  Word spread fast, and where it went the scavengers found it.  Pirates, knowing the island not only to be unprotected by the World Government but unable to protect itself, set themselves upon the island.  The local policeforce were far from enough to stop the pillaging.  As the island's richest family, the Lumispheres were hit the hardest.  All of their work abroad was abandoned.  They struggled just to keep the lights on.

One day, they went out.

The change was catastrophic for the citizens of Luxville, many of whom had never known true dark in all their lives.  Lex was among them, and it was a change that he simply could not cope with.  He and his contemporaries feared the night as an existential terror, as if the darkness would simply wipe them away.  They spent these nights on the roof, eyes glued to the moon as stars as a man dying of thirst would eye drops of dew.  When it was cloudy, these nights were passed inside, huddled shivering before the last little stubs of the rapidly dwindling candle supply.  Order eventually began to break down as people started going crazy from exhaustion and fear.

The first were Lex's parents, Lenny and Lucy Lumisphere.  They liquidated everything they owned, every last business and bit of property, with one exception.  Still sane enough to know how badly it'd hurt the boy, they didn't sell the Lumisphere.  Leaving Lex with enough money to take care of himself, they fled the island by the cover of night when they knew he'd be too scared to see them sneak off.

Their escape was short lived.  The merchant boat on which they'd charted their way out was a pirate ship in disguise.  The very next day, their lifeless corpses were found on the beach, stripped to their skivvies and tossed overboard to drown.  Lex responded by locking himself inside the ironically dark Lumisphere with his tiny fortune and a box of candles that he'd hid for himself and refused to come out or let anyone enter.

This changed only a few weeks later.  A ship full of dangerous looking fellows arrived on the island and came straight for Lex.  They knocked the door in, finding him on his side and surrounded by sputtering candles.  His face was a mask of whatever alloy was forged from terror and rage.  He slowly stood up to face these invaders, the anger seeming to edge the fear out as he confronted what he believed to be yet more treacherous pirates, come to steal the last glimmer of light from the town.

What came next was not something that Lex could have predicted.  The men were not pirates but Revolutionaries, sworn enemies of the world government.  As for what they wanted, it was his assistance rather than his assets.  Their leader explained how the Lumisphere name still had influence in the world.  The dead projects abroad had others who had staked their livelihoods on them, that they needed to be rekindled.  Foreign dignitaries and leaders of industry still respected the name and those to whom it belonged.  If he bet every penny that his parents had left him, he could be the spark to ignite the Lumisphere Trade Empire back to life.

Of course, nothing so good could come free.  Lex would join the revolutionaries in return, travelling for them, gathering information with what connections and resources he still had.  In return, they would set up a base on Kyndaheim and keep the island safe from pirates.  The next tribute would be paid in the bounties of those foolish enough to step into the trap they would set for them.  He was free to go abroad and do their good work, saving others from the evil of the World Government, without fearing that some day he would return to find his beloved Lumisphere gone.

To aid him in his travels, as he was not a soldier by nature or nurture, they gave him the rare gift of a devilfruit.  It was one that had been identified by catalogue, one that none of that particular band wanted to eat.  They had decided that it suited him, and when informed of what it would do he instantly agreed.  Horrible taste and all, he ate every last bit of it the second it was placed in his hands.  Mere moments had passed when his tattered old ten-gallon hat fell aside to make way for the spiring, new, pristine hat, this one with a glorious flaming wick crowning it.

Given his first orders, Lex departed the island of his birth, the only island he'd known, for the nearby island of [WIP].  His task was before him: register as a bounty hunter, join a crew, and make his way towards the Grand Line.  He was given dead-drop locations to memorize where he would find further orders awaiting him.  And so, his ten-gallon candle atop his head sputtering proudly, Lex Lumisphere, Owner of the Luxville Lumisphere, set out to reclaim the legacy that his parents had so nearly crushed.