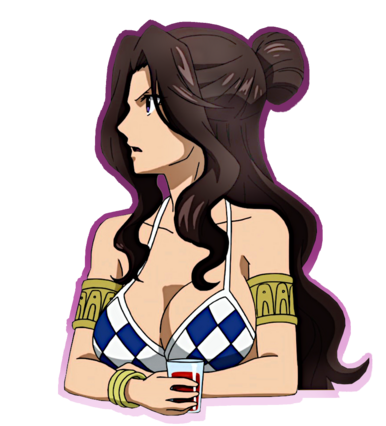 Hair Style: She has mid-back length brown hair with varying shades of color, having been seen as bright brown,  black, and, ultimately, plain brown. Two shoulder-length strands of hair frame her face, with the left one starting from a prominent, high fringe.
Hair Color: Dark Brown with natural light-brown highlights.
Eye Color: Brown/Gray Tone (Often giving the illusion that her eyes are a soft black purple tone)
Scars: N/A
Clothing and Accessories: Ebyssa's shapely upper body is usually left largely exposed, with most of her attires being distinctively scanty: Ebyssa often wears an outfit that is scanty/exposing, but slightly more concealing: compared to what she also usually wears which is an array of bikinis and strapped high-heels, along with huge pieces of jewelry. Her usual attire though sports a white shirt, which left her abdomen and forearms exposed, held closed by a band below her collar, which was decorated by a wavy blue motif, and tied in a knot below her chest, which was exposed by the shirt and covered in a dark bikini top, with white edges flanked by wavy, protruding hollowed trimmings. Her black capri pants were held up by a tighter-fitting, lavender belt adorned by red hearts, and her high-heeled sandals were replaced by short-heeled ones, secured to her feet by many striped bands, which end mid-calf.  While in this outfit, she had no visible jewelry. Also, she often wears a dark, revealing bikini paired with light-colored flip-flops. Another popular outfit of hers is a light blue bikini top which features a camouflage pattern, a pair of capri pants, with two bands hanging from each leg and a light belt covered in heart motifs loosely tied around the waist. She completes her general outfit by wearing a pair of high-heeled sandals. She also had a pair of metal bracelets adorning her biceps, bearing an incision composed of many "A"s, and three simple, round metal bracelets on her right wrist.

Description: A woman of elevated beauty who is somewhat taller than most human women, but elegant with an olive-skin color. She has black hair, brownish-purple eyes, and thick eyelashes; Her hair is wavy and passes her shoulders. She bears a voluptuous figure with a large chest. Although her voluptuous figure also looks to be very fragile, due to her toned and thin body-size, which is the opposite of her personality. Ebyssa also is known for her thick thighs, and amazing body; she is the stunning imagery of beauty and confidence.

Main Traits: Loyal, Independent, Adventurous, Adaptable, Briliant, Incorruptible, and Generous.
Likes:
Walking: Ebyssa enjoys walking, it helps clear her head and gives her a grain of peace.
Exploring: She loves to discover new places never seen before, or places she's never seen.
Historic Events: She loves to learn about any historical event, of the ancient times such as islands, or items such as weapons.
Books: Books are her main source of knowledge. She can be found browsing the library and archives trying to find out as much about everything as she can.
Mystery: What sea bearing soul doesn't love a good mystery. This is due to her love for exploration and her goal to discover new places, the mystery is just a cherry on the cake for her.
Humor: Ebyssais into different types of humor and is into different kinds of jokes. Rather if it's about someone's death or even a lame one to smile about.
Music: Music from the lips and music from the hands, Ebyssa enjoys and loves music; she can’t help but to dance, hum, or sing along if she knows the tune.
Knowledge: Curiosity killed the cat, right? However, due to her curiosity sometimes it can be a good thing. She enjoys and loves to learn things of all kinds, and enjoys the culture and respect of honoring others' way of life; as long as it isn’t evil/harmful to others.
Dislikes:
Hindrance: Ebyssa is normally a very productive person in her own regard and does not like to be hindered in any way. Any hindrance to her goals will be removed.
Destructive People: She cannot stand when people purposely destroy anything that has value to it, whether it be a personal value or monetary value. Much like the marines she often deals with.
Enslaving: Being that she watched her father enslave a whole ocean of fishmen, she is disgusted by the act.
Alcohol: Although she isn’t a fan of alcohol, she sees the purpose of numbing her thoughts with it.
Interruptions: When she speaks or is doing something, Ebyssa hates it when someone interrupts her.
Lonesome: Due to having everyone taken from her when she was younger, she has a high dislike of being alone. Basically a fear.
Spiders: One of the only insects the woman can't stand. If she could eradicate them she would.
Snakes: One of the only reptiles the woman can't stand. The way they slither around just creeps her out.
Unique laugh: Does your character have a unique laugh? Well, it should. (Seriously, you need one or you're banned for life! I'm totally serious! Like, really, really serious!)

Personality:
Her personality is ironic for being a resident of a justice-seeking society. Her spirit was born to be somewhat light-hearted and bubbly (Although not often does she show this part of herself,) despite her dark and heavy past. She is consumed by her revenge and often pays no mind to her job as a marine.  Also, since shes a very-well informed woman from all the books, databases, intellectual recordings, and the first-hand experience shes had the pleasure of enduring. In exchange, she can be somewhat of a walking encyclopedia at times. Due to not taking her job as a marine serious she is usually spotted hanging out with the locals and having a laugh with them; unless she's being yelled at or heavily watched by her superior officer.

Ebyssa can be ambitious, romantic, and a bit stubborn about any life matters. She possesses great devotion to all work, such as tasks or favors asked. She has unquestionable courage when it comes down to risking it all for her friends, or anyone she cares for in that matter. She enjoys being highly active and taking risks, as long as it benefits herself or a loved one. She, however, doesn't enjoy failing or losing. Nor does she enjoy working with coward-like people but however she will tolerate them to the best of her ability. Ebyssa can be a very athletic and competitive person; at times she will compete with her peers to either hone or show off her skills to sort of exert her superiority and to show off that the work she had put in is paying off.

Ebyssa is full of determination and passion, one of the more goal-driven people inhabiting this world as well as one of the more intelligent ones. Her intelligence isn’t just bounded as book-smart, she has a sort of natural knack at being a somewhat battlefield tactician. She will always try to find the most beneficial solution to any situation. Ebyssa doesn't know it but she has a natural knack for being a leader and a visionary. A dreamer is what she is, but not just a hopeless dreamer, a dream chaser, one to conquer any dreams she sets out for.

Ebyssa's loyalty (ironically) makes her the most trustworthy person, she will die keeping someone's secret if it's of that importance. Her loyalty may be hard to gain but once someone has they won't regret it. She can be enthusiastic when surrounded by the right people which also boosts her self-confidence. However, she has quite a bit of self-doubt, but this is a trait she tries not to show; she sees a lack of confidence as weak. Often she tends to judge someone's choices in certain situations like a way they went about an issue with another living-being or how they fought, but her opinions are kept to herself, for the most part. This is her more negative side she tends to hide from the world.

However, don't mistake this girl's sympathy or kind nature, she can be ruthless when need be. Quick to carry out missions requirements making sure to follow through with her orders. On another note, don't worry if murder is required, she can carry it out emotionless and as well as a clean kill. As long as she feels it'll bring her closer to her end-goal.

Due to her past and coming to who she is now, this hyper-intelligent woman, with an insane amount of courage often finds herself fighting her insecurities. Due to living life like a marine and fighting pirates with her memory loss, she had developed a sense of cold-heartedness even though she fought to remain true to herself, the woman her friends fell in love with and she found it hard to channel her. Maybe it's because she never really got attached to anyone while she was with the marines. It's all a game to her until she can accomplish her reason for setting sail.

Finally and most of all Ebyssa can be unpredictable when it comes to her emotions. One minute she could be perfectly fine, but then quickly introverted and refusing to communicate, depending on if she was triggered or not. An important note is, even her kindness and generosity has its limits. If she has her eyes set on something she will do anything and everything to achieve it and throw everyone else's emotions or opinions in the trash if she believes it will get her closer to the goal.