Summary: "Lazy musical pirate found himself in a pickle as short temptered pirate captain blew his top and wanted him dead. It was up to him to determine the measurement of effort is worth sacificing his laziness. He is on the verge of capture when he stumbled upon a mountain of a pirate - ally or foe he is unable to distingush at a glance."

The North Blue, more specifically the harbour somewhere within holds such enriched history that scholars had spent all their lifetime digesting and still never have enough space to store. It was a bright day, the sunshine directly above the bustling commerce, with heat beating down, beads produced from hard effort. In Spider Miles where we begin the story of the young, lazy navigator. The first word was not made with determination and spirited hopes and dreams but with a tired pant.

Canary's footwork was frantic, it had been five minutes since he had severed ties with the pirate crew of seven days. The gig was great, little amount of effort was made, good food and they even looked to him for advice regarding weather. So why, he thought, found himself balancing his cumbersome frame, sprinting with his trusty Shamisen on one hand and a sack on another - had it all fallen apart?

"Get him!" A boisterous shrill from henchmens, all built wider than he. Their guts bounced - their weight was slowing them down, but their hounding presence and their tenacity marked the lazy man's face in a state of panic! Weaving and ducking through the bystanders. The long banged hair had managed to place himself on the empty path, free of merchants threatening to impede his escape, but the distance between him and the rotund henchmen grew ever so thin.

"Fer…" air lightly escaped from his larynx through his lips. The sudden appearance of long lumber threatening to slam against his face was narrowly approaching, and ducked with a clang of his shamisen bashed against the dirt. "Fuck sake," mouth agaped, peering over to his disturbed musical intrument - small stain but nothing permanent to be had upon his complexity. His quick thinking and stumble cost valuable distance, but his overconfidence peered over his shoulder with renewed chuckle.

Out from the frying pan and into the fire. His inflated confidence came back to bite him, colliding against the unmovable wall of flesh. There was another reason why the gig was great, the pirate captain was a towering man with a heart of gold. He could say just about anything he wanted and the captain would shrug it off. A navigator and ability to see the weather's future was a rarity and a boon for the crew. Canary could've gotten away with it all if he refrained himself from making disparaging remarks about the captain's disfigurement - a large wart on the tip of his nostril and he had a flat nose.

"Yo," Canary drawled. Stepping back far enough to allow his head to crane high enough to see the incensed captain's face. Upon witnessing the growth on the end of his snub-nose, he couldn't help himself.  "Did ya find yer nose?" He grinned.

Red faced towering captain, reaching closer to ten foot emits ill air around his form. His eye glinted over to his men, roly poly under the large lumber and back at the cornered musician. The fuming face turned to a curled smile, "You better be regretting your words, Canary."

"I guess…" he replied with a shrug. They knew that the navigator was not a fighter, but they had failed to grasp how wily the man can be with a little bit of effort. The oriental string instrument sings a note with one finger from hand holding the shamisen and he looks back at the captain, escaping a strained tone, "Ah! We'll see." 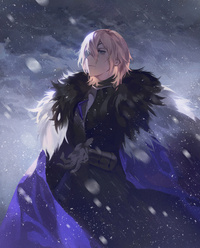 The land of Spider Miles was unlike anything that Cygnus had ever seen. The large city held many factories that were all very foreign feeling to the large dog. From the small people that walked around him to the irritating smell of smoke lingering in the air it was almost overwhelming to the Mink.

Surprisingly, The smell of the city was not what woke him up from his nap, But it was another fight that seemed to be brewing near him. The sound of multiple heavy steps and the slightly winded voices yelling seemed within a reasonable distance away from him, only being a couple of blocks away from his current position. With a yawn and a stretch Cygnus slowly sat up and collected himself.

Whether it was a potential conflict or a new friend he was going to make Cygnus could not stop the feeling of excitement that seemingly radiated off of his body. Unfortunately it seemed that energy did not change how he looked to anyone around him. By the time he had slowly gotten up and began walking he could feel the eyes of local citizens staring him down. "Wonder what their deal is" He thought to himself seemingly oblivious to the fact that it would be quite obvious to anyone that looked at him for more than five seconds that he was in fact, a Mink.

As Cygnus slowly stomped through the streets he could hear the conflict more clearer than before but he was still unable to discern any actual words. However, Cygnus does catch someone closer to him whispering something he did not want to hear. “Hey isn’t that the dog who destroyed part of the food market?” Cygnus recoils at the overheard comment, “Oh no, This is really unlucky” He says to himself, preparing to run away. “I just don’t get why they can’t believe it was an accident but if those people report me I’ll never leave this island alive”

Cygnus immediately starts sprinting after this, knocking over several people before taking a sharp turn to the right. The first thing he sees is a figure larger than the average man lurking over a slightly dirtied musician. But Cygnus has no time to react to anything else around him he only has time to scream out a warning “WATCH OUT” As he runs into the large man he stumbles for a second before regaining his balance and continuing to sprint down the road.

As he calms down from the collision he realizes he is holding someone but whether it was an individual involved in the altercation or someone else entirely he cannot see for himself.

His mind and soul intermingled and conversed: they spoke about the future. Though they are both young, there was one that they spoke in unison: they were tired. Why make so much effort when others can do better? Life was like a game of Shogi and the two had begun playing it. A life of ease and sloth had been Canary's mindset for the past few years and continued to do so - Slow and steady, allowing the body to mature. The presence of the three hostile figures painted a slight tinge of nervousness. The middle finger flexed and brushed against the strings by the neck of the Shamisen, string trembled with a singular flat note rings throughout the street. He could tell the redness splattered all over the towering, stocky captain that his anger had yet to recede - not without a reprimand.

"Lads!" The snub-nosed captain bellowed. Harrying his men to get on their feet and corner the lone musician. They inched closer towards him as further bluster rippled across the street with discomfort, "Grab him and take him back to my ship!"

Placed under such predicament, Canary was eerily calm. His unburdened hand rested on his hip and leaned to the side. He had not yet mastered this unspeakable sense, but the feeling of the universe going his way was enough to rebut.

"Yer should be watching yer step!"

There was confusion among the trio. The two porky underlings looked at each other, struggling to accept his words. Canary was a short man by their standard, the air surrounding him far deviated his slacking composure. Enigma best described him and despite his soured attitude, they carefully approached the Shamisen player with swords drawn. They inched closer, ready to lash out upon the calm eye in the bashful storm when an untold event arrived not with exclaimed announcement but with a violent wall clashing against the incensed Captain - Canary unworded prediction rungs true: uncertainty arrives not without a whisper, but a clash of titans.

The whole event was a blur, and all of the sudden he found himself being under the grip of the titan, and what a titan he was. The two henchmens were lost from the altercation and leapt to their superior's aid in which the captain enraged.

"Lads!" He bellowed, the hot air steamed from his nostrils clearing the dust picked up from his heavy fall, "Get him!"

The two looked at each other with a gawped look on their face and saw the giant humanoid dog pacing into the distance with a familiar tattered green robe fluttering from the mink's flank and began their chase.

"Say,.." Canary couldn't figure out how he would react to this. It wasn't every day when he was saved from certain doom and now nestled in the Mink's grasp. He chimed up once more, testing to see if this was all the titan's plan? "I don't mind bein' carried, yer know. Just dat I hope yer know where yer going."

Though he could not see what was going on, he could hear the chaos and frustration coming gushing in from all directions and clashing against the mink. He could feel the burden crushing against the offending saviour, "Hey," he spoke, hiding his flat expression to himself, "yer a champion, yer know?"