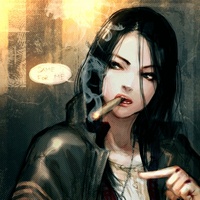 Summary: The Primetime Pirates are hired to steal back a piece of art from the notorious Rampant Rabies pirates. The Rampant Rabies pirates were last spotted heading towards Rubeck Island, a known respite for smugglers and pirates alike. Layla is sent to complete this job under the supervision of Desmond Wilkz, aka 'Big Dirty'. The Primetime Pirates are promised full payment upon retrieval and delivery of the art piece, but things don't go as easily for the crew as first intended. 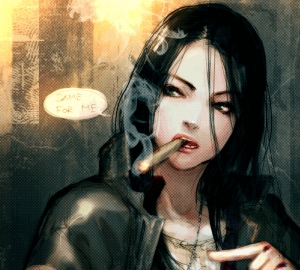 ‘I hate how slow we are.’ The raven haired woman thought as she stared with intense focus at Rubek Island which the Dead Air was moving towards slowly. The normally patient woman, or at least she considered herself as such, was in an noticeably foul mood as she leaned against the mast. Layla knew she had no place for being upset or moody on the ship as she was obviously the runt of the crew, but when it came to her work she prioritized that over everything.

A couple of days ago the Primetime Pirates had been hired to steal back some art from a pirate crew known as the Rampant Rabies pirates. When the Phantasm had been told this would be her responsibility to complete she simply nodded and began prep herself for the job. Though this was all ruined when the client admitted they had no idea where the Rampant Rabies pirates were going or had been. Therefore she was searching for one specific ship in all of the North Blue.

This task grew more problematic when Layla remembered about the Dead Air’s snail-like pace on the sea. Even if she had somehow gotten wind of the Rabies pirates it’d take incredible luck to catch them. That was the problem that had been plaguing the woman's thoughts until the that morning. The Rampant Rabies pirates sailed right past them and towards the same island the Dead Air was currently floating towards lazily.

Layla could feel herself dying inside as the ship grew fainter in the distance only to disappear around the island somewhere. The woman had a hunch that the Rabies would be docking at Rubeck since it was a common place to lay low and kill time after causing trouble. All she had to do now was wait for the Dead Air to get there.

The woman dipped her head and let out an exasperated sigh. Despite her good luck on having her target come to her, Layla couldn’t help but feel as if there was some higher power laughing at her predicament. And just to kick her while she was in a foul mood the loud mouth of the ship was now on the deck. His gargantuan stature already made him a presence difficult to ignore but his bombastic personality and gaudy attire practically made it impossible. Hopefully she’d be able to actually get some peace and quiet on the job and away from the Dead Air. Though she had a feeling she wouldn’t. 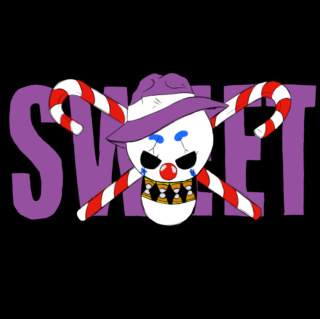 OOC: (-eh is a cough; -ee is a weeze)
Many thought the Dead Air to be quite the Queer vessel. It didn't have a traditional look, nor did it have a traditional deck. Parts of the starboard and port of the ship were exposed, but the majority of the deck itself was covered with circus tents. This meant that no matter the weather, most of the crew wasn't exposed to those elements due to the fact that the quality of the ship's build was beyond that of your average sea-faring vehicle. Where the Captain's Quarters where meant to be had once been a doctor's office, however, given the ever growing nature of the crew, Brood turned it into a meeting hall.

Brood took a moment to look upon his commanding officers as he sat upon his makeshift throne, comprised of beer kegs and other loose debris. It sat within the meeting hall and showcased the way that Brood thought of himself, though there was a very defined layout to the room that showed off it's exclusivity. To either side of the throne were padded chairs. Well constructed chairs that were very comfortable and were far more expensive than Brood's solitary throne.

Each of the chairs seemed polished, though it appeared as though many of them were empty. Only Erudite and Desmond found themselves seated on either side of Brood. There were six chairs on each side, evenly positioned between one another. Brood didn't allow the weaker members of his crew to enter here beyond the janitorial staff. Those who had yet to earn his trust weren't allowed in here either.

Waving his hand, Brood didn't even bother to look at Desmond as he relaxed in his uncomfortable chair. Taking a moment to look towards Erudite and discuss with her about an upcoming event that the crew was going to be participating in.


Desmond arose from his seat, belching all the while. He showed no hesitation as he made his way outside of the meeting hall and onto the side deck in which his new-found comrade, the desert thief Layla, awaited him. He'd yawn loudly, clutching in his hand a gourd of some strong spirits that he pilfered from the stockroom earlier that day. He didn't seem all that worried about what the day would demand of him, but did seem all the more interested in getting to know more about the mute woman on a more personal level.

Why Brood thought it a good idea to send someone of his asininely large stature on a secret infiltration mission was beyond Desmond's understanding. But perhaps it played into the future role that Desmond would play among this here crew.

"Looks like today is ya lucky day sweet cheeks. Yous and I gonna be doin' the contract for those Rat Bastards. Looks like we doublin' up. Not only is we gonna rob em, we gonna capture dem." His large smile showcased the raw emotional high he got from the sheer idea of causing harm to others. He really did enjoy to cause misery, especially if he was getting paid for it.

The thirteen foot tall juggernaut peered out over towards the far away island with a snort, reaching down so that he could offer his hand towards the woman. "Since ya weak as fawk, I don't want ya ta die. So take ma hand." He sounded less and less like he came from the North Blue the more and more he grew in strength. As though he developed his own unique way of speaking from all the adventures he had throughout the Grandline.

A feat that alone testified to how strong he truly happened to be.

If and when she took his hand he would hoist her up so that she could sit on his shoulder. It was easier that way and when the ship was close enough to fire upon the port, he'd merely leap upwards and ride one of the grumble balls (cannonballs made out of sugar) that were fired out of the cannon itself, so that they could make it to the port unscathed.

Since the ball would naturally shatter over the flight above the water, Desmond utilized his leg strength to rocket off the ball even further than the distance would normally allow. Landing somewhere along the beach that would lead them to their destination. It would still take the pair at least an hour to get to their destination, but that was better than waiting for the ship to waft in close enough for it to dock naturally. Not that Desmond minded a little walk. Especially if he was doing so with a fine looking lady like Layla. She had tits and she couldn't talk? Talk about a win-win scenario.

He'd place the woman down softly against the sand before speaking to her. "Alright, we just gotta head west." A simple directive, one that he was allowed to make since he was one of the top officer of the Primetime Pirates. Something that he figured that he should get out of the way in telling Layla now. He was aware she was new to the crew and despite her job as a Quartermaster, she probably lacked the understanding of how the crew itself was structured.

"Was curious, ya on the crew ta stay? Or ya just passin through?" An important question to ask the female, he kept his eyes focused on her so that he could figure out just how she communicated with the majority of the crew itself. He had hoped she brought with her all the tools that she needed. Desmond often only needed his raw physical power to get shit done.

Which begged the question of why they needed this physically weak stealthy bitch on the team. She had best prove herself, or she'd not be making it back to the crew in one piece.