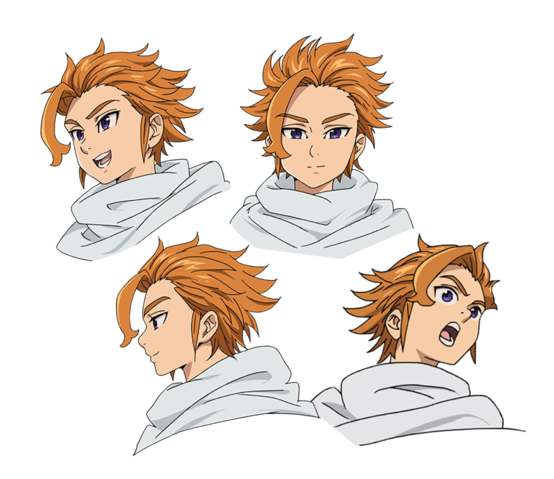 Hair Style: Arthur’s hair is medium length, the ends of which reach just below his ears. He keeps his messy hair brushed back though no matter what he does, he has a cowlick that hangs down the front of his face.
Hair Color: Amber
Eye Color: Violet
Scars: None
Clothing and Accessories: Arthur wears black pants that fit comfortably against his legs and no undershirt, on his feet he dons black boots with a white cross on the toes. His upper body is covered by a buttoned up white long coat, the trimming has been seen in both red or black crosses. His gloves share the same pattern as his long coat, white with red or black crosses adorning them. Around his waist he wears a thick brown leather belt with studs, the belt's position allows him to comfortably wear his sword on his left hip. When traveling he occasionally wears a white cloak that drapes from his neck down covering the entirety of his body, the cloak also has a hood to allow him to conceal his face and hair when he wishes to not be recognised.

Description: Arthur genuinely looks up to the average person, standing only five foot seven in height. He has a narrow frame and no deeply defining muscle tone to him. Arthur's face is vibrant and youthful, with no sign of facial hair to be found. His small size has had him mistaken for a kid a few times in his life.

Hometown: East Blue - Island of Britannia - City of Camelot
Personality: Arthur is a polite, young man who is still adjusting to his new life on the sea. He takes his responsibilities very seriously, but usually undertakes them with a smile and has a very warm, and happy demeanor. Despite his outward appearance, it would be wrong to characterize him as immature or oblivious.

Arthur’s trait of fearlessness is shown when he smiles at the face of any opponent no matter their strength or standing. He is also very bawdy and loves to frequently tell jokes. Occasionally, he is willing to take advantage of a woman's naive nature and grope or comment on their curvature, not even ashamed of doing so in public. He has a strong sense of justice and is willing to help people in distress. Even when he is severely injured or outclassed, he tries not to show weakness and stays strong in front of his companions.

He maintains the facade of a very calm person. However, if his companions or friends were to be harmed in any way, he is capable of extreme rage. He is also enraged when someone tries to take his sword or treasure. Arthur tends to be soft and naive, shown by his desire to never kill anyone, even someone who is a serious threat to his companions. Arthur dislikes killing, preferring to be merciful.

Britannia had become an island of disrepair, nobles at each other's throats as the governing monarch's only successor lay in his deathbed. With talk of war arising for those who seek the crown of Britannia, only one noble turned away from the hate and violent outbursts, Aragorn Pendragon. Instead of bickering and drooling over a seat of power, he turned to his people of Camelot in their time of need spreading food and water at his own expense.

During these dark times in Britannia, Aragorn stumbled across an orphaned child on the outskirts of Camelot. Being unmarried and unable to sow an heir he decided to adopt the boy, bestowing the name “Arthur Pendragon” to the child. Arthur loved Aragorn as the father he had never had and Aragorn returned his love tenfold, they were inseparable from that day on. After 3 years Aragorn had taught Arthur to chart maps and understand the art of navigation. In this time together Aragorn managed to hide his deadly illness, He had contracted what the locals called “King’s Cough”; named for having killed the previous king of Britannia. Arthur watched as the only family he ever had coughed away his very life, tending to him as his lungs filled with blood suffocating him. Aragorn's death brought change to Arthur’s life, the land ravaged by war with no order; Niko, brother of Aragorn, took the title “Nobleman of Camelot” claiming Arthur was not a legitimate heir. Arthur was forced from his room and placed with the servants.

Years passed as Arthur cooked, washed, swept, and cared for the tyrannical Niko. The city of Camelot fell to depression as he taxed their heart and soul away, Arthur knew something would have to change. So on the night of his 18th Birthday he waited til everyone on the castle grounds slept, he snuck into the chambers of the man he hated most and plunged a sword through his heart. Watching as the light left Niko’s eyes he wrote these words on a parchment;

‘By the blood of this blade, the sorrow of this land, I pledge to return when I have proven to be a great warrior of the sea. With what I learn I will bring order to this place, this I swear on the name of my father Aragorn Pendragon.’

With the help of his most trusted friend; the butler of Camelot Castle, Arthur escaped on a small single sail boat. Setting out for the vast ocean known as the East Blue, Arthur’s vow would help him to persevere no matter what.

Months of sailing landed young Arthur on the shores of Conomi Island, an archipelago rich with fishing towns with a tropical climate. For a short time Arthur made a living with a fishing crew, training his swordcraft at night in order to help reach his ultimate goal. One day while working on the coast, Arthur spotted a small vessel aimed for their port flying a white flag. While most ignored the boat due to the sign of surrender and peace from the white flag, Arthur began scanning the deck with his eyes noticing the small three man crew. Instantly a cold sweat ran as he saw the intent in their Captain’s eyes, Arthur jumped off the fishing boat and began paddling towards town with all his strength. The vessel dropped its white flag moments before docking, the black jolly roger of a pirate now in its place as they began raiding the unsuspecting village. Running to his small shack outside of town, Arthur grabbed his sword and ran to the town full speed. Arriving in town Arthur stood his ground and challenged the pirates, the two crewmen charged ahead only to be quickly dispatched by Arthur’s blade. The Captain's hands began to shake nervously as he slowly reached toward the gun in his sash, Arthur began to charge forward, sword in hand and tip to the ground. With a quickdraw shot Arthur stumbled to his knees, blood dripping from the grazed hit on his arm. With the Pirate’s confidence bolstered thinking he shot him directly, he walked towards the young swordsman laughing maniacally. Once he closed the gap Arthur sprung his trap allowing him to deliver a penetrating stab through his heart.  It has been three days since that fight, only time knows what lay ahead, for Arthur Pendragon.