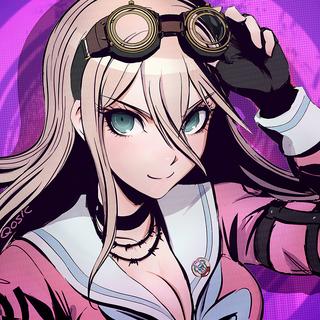 So far, so good. Having destroyed most of the blockade and causing the rest of it to flee in panic gave the Primetime Service & Delivery crew enough time to maneuver their way around the backside of the island of notice, offloading their essential assets, that being the few who were given missions to head out and kick ass. Molly countered herself alongside those lucky few, especially since she got to go with another relative newcomer to the group, one Kabetogama. He was one of the younger crewmembers, but he was built rather tall for a human.

She herself was older than him by four years, but she only stood at five feet, four inches. So she had to look up at the man when speaking, but it wasn’t anything new. She was used to being a shrimp puff. Even if she was one of the more wild members of the crew.

She’d adjust her hammer in her grip, hoisting the object, which was the same height as herself, over her shoulder. A satisfying thump noise as it hit her shoulder blade.

She remembered that their mission was simple. Recruit criminal elements to their cause and get them to understand their new role on this island. It was a good thing then that the pair of P.T.S.D. operatives had found themselves well and truly in the underbelly of Notice. This portion of the city was far and away underdeveloped. It screamed its seediness from the rooftop.

Something that was slightly attractive to Molly, in all honesty.

She’d place her right hand on her hip, since she was left handed, and she’d look over towards the giant man to her side and raise an eyebrow. Grinning wildly before she’d speak to him. “So kiddo, where do you wanna go first? Consider this a test from your big sis.” She exclaimed such a fact easily, finding herself chuckling all the while.

There were a few options that he could have pointed out, especially in a seedier part of time. A few abandoned looking buildings dotted the landscape, some taverns and bars were around as well. Several dark alleyways and other stores were easily capable of being seen. Perhaps one of these buildings even functioned as a warehouse. There were simply far too many options to choose from, but she wanted to know what the swordsman’s instincts told him.

Molly didn’t really care. She was part of the demolition squad alongside that psychopath Jackson. Though her job was more like… knocking down doors and making entryways. As to where Jackson was meant to destroy any and everything in his path. Still, her job didn’t require her to make decisions often.

Which was why she was passing the buck onto the young buck.

The swordsman has been lost in thought ever since he made land on Notice. The young man had no difficulty understanding the expectations and scope of his mission. He was to make sure the local criminals of the island understood where they stood now that P.T.S.D was moving in. The issue that plagued Kabe was the fact that he had already lost the use of his favorite cloak. Replacing it was now a tight, black shirt that Kabe assumed he had stolen from someone else on the ship. It's not like it is a crazy big deal because the tears in the cloak were minimal and definitely played up by Kabe in the moment. It is more so the feeling of actually wearing a proper shirt for the first time in a while that bothers Kabe.

But it wasn’t all so bad. The man had just recently gotten the chance to meet Molly, who despite her small appearance was still just as violent and chaos loving as the rest of Kabe’s crewmates. That is not to say that Kabe minded the behavior, the shipwright loved breaking things even more than fixing them so he could relate to his new family.

As the pair continued their walk through the slums of Notice, Kabe looked at all of the local stores. A fair majority appeared to have some tell-tale signs of crime, broken glass, boarded up doors and windows, and the occasional pool of blood. Compared to his hometown, this part of Notice was very shitty, but so much more interesting.

The ex-knight looked down when Molly approached him and put away his whetstone, giving his crewmate full attention. The beginnings of a smile showed itself on Kabe’s face when he was told that he got to decide where they checked out first. With his head on a swivel Kabe could clearly see that there was a high concentration of bars but he was pretty sure that no major crime bosses would be caught dead in some saloon, at least not this time of day. The abandoned buildings on the other hand had a lot of potential. They are in close proximity to the nearby businesses and spacious enough for a large group, Making them the perfect place to set up shop as a gang.

Kabe crossed his arms before responding to the short woman.

“Hmmm, as fun as it sounds I think we should avoid alcohol for now.”

The swordsman unsheathed the saber on his right side and pointed at one of the closer abandoned buildings..

“I have a good feeling about those buildings. Let's cut through these alleyways and see if we can bait some idiot into trying to rob us too.”

For the five or so seconds that Kabe had taken to make his decision he was confident that he had made the right call. By going through the alleyways he was hoping for someone to take the bait and attack them. If so, the pair of pirates had the perfect opportunity to get information and discover exactly where the leadership is for the local criminals. The plan after that is much more fluid and simple. Kabe and Molly inform the gang leaders of the coming changes to the island and they leave peacefully after coming to a mutual understanding of the current situation. In Kabe’s mind there is no way that the locals will try and resist. But after giving it more thought the young swordsman has a feeling it won’t be quite that easy.

Molly figured that this was a good foundation for the goal at hand. Cracking a few skulls was the fastest way to convince the punks here that the P.T.S.D. was the new owner of the island.

To that end, Molly hoisted her hammer once more, flipping it off her shoulder and pointing it towards the same alleyway that Kabe had. A large smile on her face all the while. “Lead the way, little man.” She exclaimed with a haughty tone of voice.

Resting that hammer once more she let him go in front of her. Even though traditionally she was the first one out and about. She’d pop a small gumball into her mouth, chewing it endlessly until she blew a bubble and it popped. This popping was not some random insignificant detail, however. Though its significance wasn’t important now, it was merely something noticeable.

There was another reason that she decided that she’d definitely let the kid decide how shit went. So that if things went sideways she could just blame him. She was so smart, impressively so. It brought a smile to her face for sure.

She’d hold her left hand out, looking at her nails as she continued to speak to the giant man. “So tell me, what made you leave your home anyway? I know how you got on the crew. But what did you do before that?”

She made small talk because it was better than just walking around looking menacing. They were a crew that didn’t care about collateral damage, but not everyone on this crew was a villainous person.

Molly most certainly was, she loved destroying shit, but she knew there were some softies on this crew. It made her wonder what kind of person Kabe happened to be.

Plus, there would be plenty of time for fighting soon enough. Best to know a little about the person at her back before the blows started flying. She needed to know if he was going to be a liability or not. She did know that he survived being sent to take out a ship.

Which… is really fucking impressive all things considered. Taking on a whole crew was usually a deathwish.

Unless of course you were one of the heavy hitters like Desmond and his libido.

Despite her casual demeanor however, she was very astute and aware of her surroundings. To the point in which she was capable of completely keeping tabs on the numerous people that were looking in the pair’s direction.

No one had made any moves just yet. But she was also releasing a bit of her own menace so that everyone in this area was completely aware of how bad of an idea it was to attack the pair.

Kabe wasted no time when taking the lead, going so quickly that he almost forgot to respond to his fellow crewmate calling him little. The big man turned his head to make eye contact with Molly but continued walking through the alleyway. “Little man? Grororororo! You’re pretty funny!”

The swordsman paid practically no attention to the other people in the area, While it is true that Kabe is known to be pretty observant of his surroundings and people, The man was currently more focused on making sure his scheme would work smoothly. During the duo's long and arduous journey through the alley Molly asked the golden-haired boy an unexpected question. Only a couple of the other important figures in the crew had asked Kabe about his past so he was a little taken aback, Though he supposed it made sense to want to know more about someone that you will be working with.

Kabe slowed his pace before speaking. “Well I grew up in Mapleshire, in the New World. When I lived there I did a lot of fighting and stuff with my brothers and sisters. My dad is some bigshot knight so we all had to follow in his footsteps. I got tired of everyone telling me what to do so I decided to leave. It’s not like I’m some crazy idiot, I can handle a couple of rules but everyone needs to let loose a little sometimes you know.”

Kabe waited a second before continuing his story.

“So when I made it to the North Blue I actually thought about joining the marines. I went to the base on some small island and the main officer was being a huge asshole to all the villagers so I fought all those guys. Pretty sure they ended up dead too. But after that I fled and ended up meeting Erudite and all that a few days later.”

It would be obvious to almost anyone that Kabe is only telling part of the story. Kabe made a mental note to go into more detail about the exact circumstances of his departure from the island at a later time, unless he was really pressured into saying more Kabe had no plans to speak on the matter right now.

Kabe did not want to seem rude so he asked Molly a question in return. “What about you? What’d you do before joining the crew?”

Looking ahead, Kabe could guess they still had a little ways before they reached one of the abandoned buildings so he saw no real problem with the small talk.