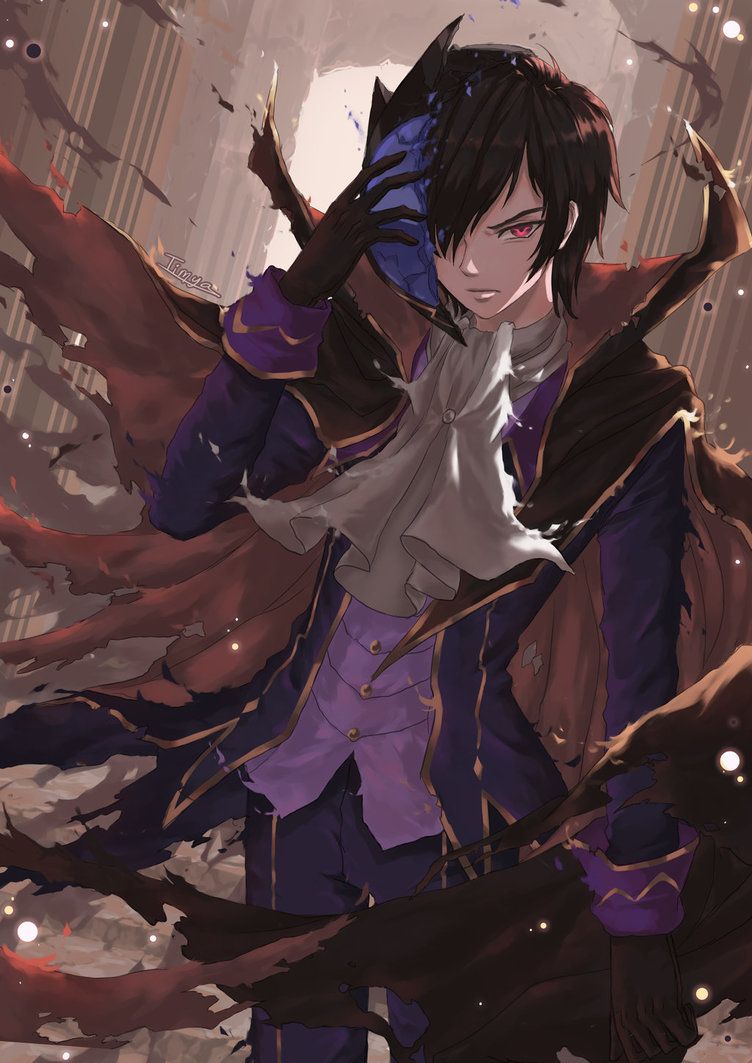 First Name: Dran
Middle Name/Initial: Z.
Last Name: Vesper
Epithet: Dirty Dran
Birthdate: 04/20/1809
Gender: Male
Species/Race/Tribe: Human
Faction: Pirate?
Profession: Professional Lookout (After years of being in the worst areas of Spider Miles and assisting the Pirates with raids Dran became accustom to seeing trouble coming from afar. Being small he wasn't one who'd be able to fight many foes, however perhaps his other allies could.)

Hair Style:  Near neck length & Unkept
Hair Color: Raven Black
Eye Color: Crimson(Left), Purple(Right)
Scars: Burn scars on the sole of his feet
Clothing and Accessories:
Dran typically dresses in a rather odd variety of clothes. His main clothes consists of a black and gold cape draping over a purple and gold tuxedo like top that matches his dress pants. It's very common for Dran to leave his top unbuttoned displaying his undershirt. Under that layer is another shirt with a much lighter shade of purple on it. The clothes although fashionable are visually tattered and torn in numerous areas. The worst being Dran's shredded cloak some spots even coated in dried blood and food. The clothes themselves look as though they need to be thoroughly wash around a hundred times before a creature should be wearing them.

Dran when on land or boarding enemy ships he will always wear a black mask covering up nearly half of his face. The reason being if he was involved in a violent dispute he'd prefer to avoid getting blood or other liquids in his mouth. Although at all times the mask is always around Dran's neck hidden under
Description:
Dran has a well toned body and tall figure, however he might not be the tallest amongst humans he was definitely relatively tall in general. He prefers his current figure to that of a more bulky figure, after all he was more likely to avoid blows and slashes with a thinner figure. Dran's body is almost entirely covered by his attire and accessories henceforth most people don't get to see that area of him.

Main Traits:
-Handsome
-Perceptive
-Deft to smells
-Anosmia (Loss of Smell)
-Hard headed
-Reasonable
Likes:
-Berries
-Purple
-Rustic Ships
-Freedom
-Stealing
-Diplomacy
Dislikes:
-Bandits (With some exceptions)
-Marines
-Revolutionaries
-Slavers
-Being Robbed/mugged
-Killing Others
Unique laugh:
Out of Combat:
When laughing out of combat Dran typically lets out a wisp of air before breaking into a loud almost obnoxious laugh that could be heard around an entire room. His teeth are always parting which typically means he's in a good mood.

In Combat:
In combat if Dran were to laugh it'd be a lot less joyful. More or less the sound of the laugh is more psychotics than anything else. His teeth only part around an inch to allow air to escape in the sound of a raspy and bone chilling chuckle.

Personality:
Out Of Combat:
When Dran isn't in combat the pirate is a very bright person. He having already been down pretty low isn't one to think he's at his worst point in life even if he's penniless or shipless. He typically goes throughout the day trying to find things to do or potentially people to plunder. Fighting isn't the first thing in this pirates mind. Instead he is a firm believer in berries talk and poor people walk/swim. Dran doesn't mind other peoples company, however he isn't one to give an arm and a leg for someone to speak with him. He isn't one to make friends easily, instead anyone useful is more or less a tool unless they prove they aren't going to turn on the Dirty pirate. If Dran was to approve of someone and potentially think of them as a friend he'd fight through thick and thin to assure they achieve whatever their heart desires.

In Combat:
In combat Dran is always level headed and perceptive. He typically doesn't start fighting immediately instead giving his opponents an option: Drop you loot or lose your life. Although most pirates would rather fight to the death Dran feels it's only fair to give them the option. If they refuse Dran will let out a rather cold laugh before attempting to fight his opponents. Whilst in combat Dran is always watching his allies and or mercenaries to assure himself that they aren't in danger. If the battle proves too difficult Dran has no issue retreating until another day. After all he is more or less in the pirating business for money not to lose his life.

History:
*Year 1809*
On a bright June morning the first heir of the Vesper house was born. Sporting two separate eye colours. His left eye crimson like his father, and his right eye a deep purple. Never the less the boy was born healthy and strong into the loving household. His Mother was named Annelise Faust, and his father Alvin Vesper. Both parents coming from well off families from another blue whom helped Dran's family prosper and thrive in the town. They had been in the town only a month before Dran's birth and as such weren't ready to announce their new family members to any of the natives for some time.

*Year 1812*
During the year of 1812 Dran's parents had properly established their business. It was a material shop based off the ports that would sell items to repair ships to anyone in need. During this year Dran's parents cemented the fact that not every pirate who sailed the sea was evil. They also mentioned the fact that the Marines weren't always in the right either. During this year the Vesper Repair parts store had made it's name and was frequented by all manner of customers even bandits trying their hands at sailing the seas.

*Year 1815*
In the year 1815 Vesper Repair Parts store gas earned the family enough berries to claim to be rich. They were now living in the upper city, however with the notoriety of being so well off wasn't the best thing. Mountain Bandits and Pirates alike were always gunning for a quick buck, and Dran's family suffered from numerous home invasions by the local bandits causing a deep distain for them in both the young Dran and his parents.

*Year 1817*
In the year 1817 Dran's parents were called to the sea by a distress call from a valuable customer by the name of Red "Gale" Creek. After a few days of hesitation the parents departed the shores, however little did they know this would be the last time the eight year old Dran Z. Vesper would ever see his family again. That very same night Dran was awoken by the sound of smashing glass and bone chilling laughter. His body went numb as he slowly crawled out of bed.

His tiny eight year old feet slapping against the hard wood floor as he approached the kitchen. A cold sweat overcame his brow as he noticed three large bandits rummaging through his kitchen cabinets. Throwing everything in including the silver cutlery the family used. Dran couldn't hold back his soft murmurs of fear letting out a whimper like sound that alerted the much older men.

As they turned towards Dran their faces darkened. "Gale said this place would be empty" One man complained as one of the other two bandits lunged towards Dran slamming his full weight down on the small boy as the others laughed. "It's just a kid not like he'll be much of a fight" The third man said.

"GET OFF OF ME!" Dran screamed, and as he finished a large fist planted itself into Dran's face quickly silencing him. As the bandit pulled back his fist it revealed a much more frightened Dran now bleeding from his nose and a cut on his brow since his body was nowhere near as tough as most others. Without losing momentum the others quickly bound Dran.

(The rest of the night will be redacted until in character development flushes it out.)

*The Next Day*
The next day Dran woke up with his hands tied behind his back and his face swollen from the night before. His eyes quickly filled with tears as he began pacing through his house. The paintings. The decorations. Even his parents pictures were all stolen. The house he once called home was now nothing more than a shell. As Dran paced further and further he struggled to open the door with bound hands.

By the time he exited the tears dried from his eyes as he slowly stepped further and further downtown. His feet began to bleed as he hadn't worn shoes. He pushed forward none the less every step bringing him constant pain that rippled throughout his body, but he wanted to see them. He wanted to see his parents again

Finally the young boy made it to the docks. Upon reaching them the boy fell to his knees. The tears once dried began to fall once more. In front of him was smoldering cinders with two crosses stuck in the ground in front of the remains of the building. Posted on those crosses were two battered and bloodied bodies Dran knew all to well.

His steps no longer hurt as he moved forwards. "Mom... Dad?" Dran spoke the hope in his eyes dying out as he heard nothing back. "Please wake up. Please" Dran called growing closer the heated coals under his feet burning into his skin as he clung to his fathers low hanging legs.

Dran stood there as the cinders from the coals burned his feet before a voice came out. "So that's where you were." A familiar voice called. As Dran turned he saw him. "GALE!" Dran scream towards the man "PLEASE SAVE MY PARENTS!" Dran screamed to the pirate who scoffed. "Why would I?" Gale questioned with a cold heartless grin as the corners of his lips seemed to curl. By this point whatever hope Dran had held was gone. His eyes began to fade to a darker hue before Gale continued. "I stung them up there for selling to Pirates after all" Gale began throwing posters of notorious pirates to the ground in front of Dran. "Your parents were just another pair of shitty pirates didn't you know" He said with a colder tone.

"SHUT UP!" An unfamiliar voice called and suddenly Gale stumped falling forward to the ground. Behind him stood a kid around the same age of Dran himself. Next to him stood a much larger man whose hand was extended. Within his grip was nothing more than a lead pipe that seemed to have taken out Gale easily.

"Boy" The man called before stepping forward and rubbing Dran's hair. "Your parents... Were good people. No matter what he said" The man said taking a knee with tears streaming down his cheeks. "Now boy survive. Get stronger, and next time take that man out yourself" The man called as he turned with the kid and began to leave.

Dran was confused as he stepped off the coals and began to wander the outskirts of Spider Mile.

*Year 1829*
After years of struggling to survive Dran had finally turned twenty. He was finally ready mentally and physically to pursue a bright future, however the years weren't kind turning a once kind hearted boy into a greedy aspiring pirate looking to make a quick buck without taking anybody's life. Only time would tell where his adventure would lead and whom he'd live that life with.