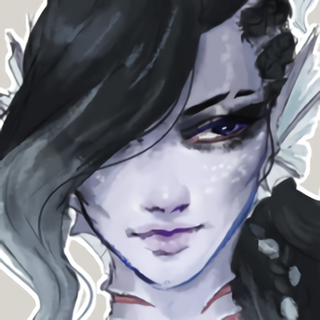 OOC: Erudite has a strong rural Louisianan accent.
Erudite stifled a laugh when she saw the reaction of her fine Mink friend. Was charity and hospitality really dead nowadays? Well, this was the new great age of Piracy, was it not? Perhaps that was the reason why there had been so much activity here in the North Blue. So many islands changing ownership, and so many islands are being conquered. And soon… the Primetime Pirates would do the exact same.

“Yes sweetheart, imma lady of my word.” She acknowledged, raising her free hand up and flipping her hair out of her face momentarily.

Her eyes gazed over towards those same men once more.

“And we all have our skillsets I suppose. Look at that darlin, ya helped me figure out my niche.” She’d give a wink before handing the cup out to one of her men who took it from her.

She placed her palms on either side of the crate, pushing up and off the wooden box, dusting off her plump backside before fussing with her hair for a moment. Turning towards Aya with a smile and her hands tucked behind her back. She listened to the red panda discuss her family, choosing not to interrupt her while she spoke.

Erudite couldn’t tell if Aya’s attitude was related to a genuine hatred towards her siblings or if this was some sort of thing that relatives did. But she did chuckle when the woman expressed with full enthusiasm that she wished she was an only child. It was funny how both ends of the spectrum could find a reason to want to be like the other. But in her own case at least, Erudite was completely fine with being an only child in most ways. She didn’t even like her own parents to be quite honest.

Thirteen kids though, that sounded… horrendous.

”Yur poor ma.” She didn’t need to say anything else but chuckled nevertheless.

She rose an eyebrow at the offer to be painted and to catch a coffee. Was this woman truly that grateful for her doing something that wasn’t all too hazardous to either of their healths? Erudite moved forward towards the woman, reaching out and patting the Mink on the head softly.


“I humbly accept yur offer, suge. I’ll definitely hit ya up, in fact, let me make this easier on ya.” She nodded her head, thinking to herself about the logistics of making such a request work.

She put her hand out and spoke towards her minions without having to look at either of them.

”Give me one of those grumble poppers.” She ordered and one of the men immediately reached into their belt and pulled out what appeared to be a sphere with a skull on it.

She’d take it and hold it out for Aya to take.

“If ya plop this here into the water, I’ll know exactly where ya are no matter where ya are on the island. Just make sure ya take a few steps back after ya use it… and uh… don’t use it indoors. If’n ya do use it indoors. Just get out of the building immediately.” She chuckled before looking at the Mink with a stern and motherly expression.

She wasn’t fucking around. This was serious business. This was a popper made of her captain’s power.

Which meant that it was incredibly dangerous and could cause a great deal of damage if not properly stored.

“Speaking of which… why are ya going to Notice anyway? Looking for more inspiration for yur painting?” She asked with a smile on her face.

Aya's light ears folded and flopped a bit as Erudite patted her head. The short mink peered up at her excitedly. Before she could even pull herself from the shimmering bliss of the opportunity to make a new friend she found herself carefully cradling a sphere in her paws.

As she rolled it into one palm the sight of the skull shot a paralyzing chill through her heart. Her pupils narrowed into focused slivers behind her shades...

....Did this nice lady just hand her a bomb of some sort?

The little mink was pulling her best poker face as she was warned about the dangerous item she now possessed. She was trying desperately to ignore the worry about types of wild ideas someone aligned with the world government might cook up if they knew she had something like this.

Of course, that was more of a worry for the future.

Erudite's smile shattered the frozen surface of Pikasso's downplayed surprise. She quickly tried to shift her focus back to what she was being asked after gingerly and oh-so-carefully tucking away the gift for safekeeping. She cleared her throat quietly before speaking again.

"Ah... Y-yes, actually! I heard the views out there are awe-inspiring at certain times of day! I figured I could use a little rest, as well... and if I'm going to spend a day resting it may as well be somewhere nice, hm? Maybe I'll even stay a couple of days!" A few nods brought the runty panda back to smiling warmly over at her. It certainly sounded as if she hadn't planned this trip in advance. "...You said you're here getting supplies, right?"

A thoughtful hum came from Aya as she slid from her seat atop the wooden box and handed the cup back over gratefully.

"Have you been there? ...To Notice, I mean." Realizing the excitement had gotten the best of her for a bit, she tried to settle herself. She was still admittedly trying to imagine what sort of huge neat ship someone like Erudite took the helm of, her imagination running rampant. She wasn't doing her ability to focus any favors.

"I heard lesser minks vacation there! So it's got to be at least kind of nice..." She laughed, shrugging as she motioned vaguely with her dark silky paws. "... Someplace youteia can get fancy little drinks with umbrellas! I don't get the chance to relax in places like that too often."

Not that islands filled to the brim with human tourists with enough money to vacation were the most welcoming for someone as distinctly fuzzy as Aya. She'd been chased out of coffee shops with brooms more times than she could have counted before she realized a little missing coffee was often less disruptive than a mink showing up to try to buy it legitimately in some places.

The world worked in such funny ways sometimes!

With a half-hearted stretch, she adjusted the straps of her backpack and took another cautious glance over the crowds. One could never be too careful, after all, even if the company she was currently keeping seemed to be warding off the most immediate trouble.

"I hope your sailing is smooth! The weather doesn't seem too bad.." Frankly, she had no idea how people kept track of that sort of thing, but it seemed important.