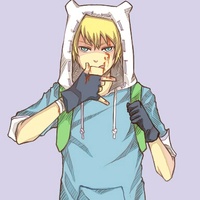 Devil Fruit Appearance: What does your fruit look like?
Devil Fruit Description: Give full description of what the devil fruit does.

Fighting Style: Name of your fighting style.
Weapon Utilization: Longsword, fist, devil fruit
Description: A mediocre sword user, Emory was taught how to use a sword by his father. Unfortunately, he held no special talent in the usage of the sword, instead preferring to use his fist and punch things. With that being said, he has grown used to using it, simply has not talent for it. Emory’s fighting style is a bit odd and complex, when Emory firsts enters into a fight, he would most likely use his utilize his sword. Using the bladed weapon to take down weaker opponents, eventually, when things get too serious or hard, Emory would literally drop his weapon and resort to his fist and devil fruit power. Something that no doubt frustrates and annoys more serious sword fighters who treat their weapons with religious respect.

Light Techniques:
Dubble Bubble Pistol- (FLAT)
Duration: Instant
Cooldown: 2 posts
Flavour: The first technique that Emory has ever utilized in a fight. “Bubble Gum Fist” is a simple and straightforward technique. Emory turns one of his arms into chewed bubble gum, and then bring that transformed arm back behind him. Afterwards, Emory will throw a straight punch while simultaneously stretching or extend his bubble gum arm forward as a fist shape tendril-like construct that is about the same size as his own arm.

Bubble Yum Stomp- (FLAT)
Duration: Instant
Cooldown: 2 posts
Flavour: A brother or sister of the “Dubble Bubble Pistol ”. While a bit different from the previous technique, it follows the same logic and principle. Emory turns one of his legs into chewed bubble gum, and then kicks out with that transformed leg. While he is throwing out the kick, Emory will simultaneously be stretching or extending his bubble gum leg forward as a foot shaped tendril-like construct that is about the same size as his own leg.

Passing Street Scrapper- (FLAT)
Duration: Instant
Cooldown: 2 posts
Flavour: A technique made to impede an opponent’s movements by trapping them in sticky chewed bubble gum. Emory transforms his entire right or left leg into a tendril of chewed bubble gum, with a blunt end that is not shaped like his foot, and then preforms a sweeping kick. While preforming the sweeping kick, Emory will attempt to tangle up or muck up the opponent with as much sticky bubble gum as possible- making it difficult to move.

Kamu Kamu no- (STAT MORPH)
Cooldown: 6 post
Duration: 2 post
Buffs: 25% to Attack
Flavour: A technique used usually in tandem with another. The general premise of this technique is that by stretching their arm or leg out, and then snapping their chosen appendage to deliver a stronger attack. When this technique is utilized, Emory will commonly rename the previous technique to “Kamu Kamu” and then the original technique’s name when the attack was being utilized. For example, “Kamu Kamu Bubble Gum Pistol”, although in some situations, “Kamu” may not be applied.

Medium Techniques:
Dubble Bubble Cannon- (FLAT HYBRID)
Duration: 3 post
Cooldown: 9 post
Debuff: 20% to reflexes
Flavour: Emory transforms both of his arms into chewed gum. He then throws his arms back before slamming them into his opponent’s stomach and or chest. This action will knock them back, and stun them due to the force placed behind this technique. “Dubble Bubble” cannon can be considered an advance variation of the “Dubble Bubble Pistol”.

Passing Street Gum- (STAT MORPH)
Debuff: 50% to reflexes
Duration: 3 posts
Cooldown: 9 posts
Flavour: A technique purposely designed to trap and impede the movement of an opponent. Emory uses the sticky and adhesive properties of his devil fruit substances to stick as much chewed gum onto an opponent, making it difficult to move. Usually, Emory will attempt to do this by using a technique like “Bubble Gum Punch” or “Bubble Gum Kick”, however, Emory can instead choose to simple shoot globs of bubble gum from his mouth.

Heavy Techniques:
Dubble Bazooka Bubble- (FLAT)
Duration: Instant
Cooldown: 6 posts
Flavour: Emory turns both of his arms into chewed bubble gum. While transformed into chewed bubble gum extends his reach behind his opponent to grab ahold of something, due to the sticky nature of the bubble gum, Emory can “grasp” on flat objects like a wall. He then pulls himself rapidly forward while turning his forehead into bubble gum, and then rams his head into his opponent’s stomach, chest, or simply to head butt them.

Hubba Bubba Chain- (DOT)
Duration: 5 posts
Cooldown: 15 posts
Flavour: An advance variation of the Dubble Bubble Fist, Hubba Bubba Chain is a powerful technique that can cause severe damage to an opponent. This severe damage done upon the opponent causes persistent damage over time throughout the battle. Emory transforms his leg into a blunt weapon-like tendril of chewed bubble gum, and then uses the adhesive nature of the chewed bubble gum to stick and trap an opponent. He will then Emory lifts his opponent up from the ground, spins them around, then slams them down to the ground. This action is done within the first post, and they are free once slammed down in the same post.

AoE Techniques:
Name of the technique
Type: (See Fighting Styles > Types in the Combat Guide for information on technique types, cooldowns, durations, buffs, and debuffs.)
Cooldown:
Duration:
Buffs:
Debuffs:
Flavour: Provide flavour description for your technique. When using this technique ICly, it does not need to follow the flavour description you provide here. However, it must conform to the cooldown, duration, buffs, and debuffs mechanically.

Hubba Bubba Break Dance- (FLAT)
Duration: Instant
Cooldown: 8 post
Flavour: This technique can be used in one of two ways; either by leaping up in the air or dropping down to the ground. Either way, Emory will transform his entire lower body, including both his legs and feet into chewed gum. He then stretches out both of his legs all around him, while twisting up his torso, and spinning his legs/torso. This allows him to kick multiple opponents within an area around him.