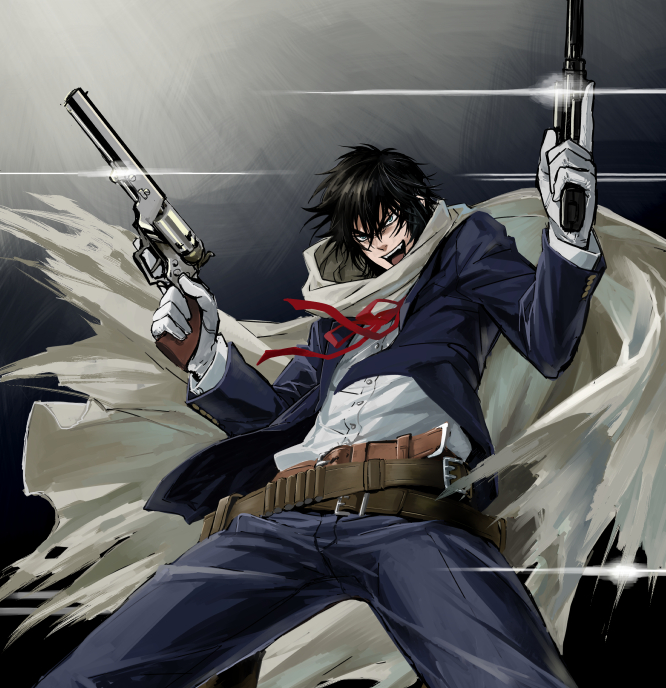 Height: 5'8½" (174 cm) I’m tall enough ta kick yer balls.
Weight: 168 lbs. (76 kg)
Hair Style: I ain’t no princess who combs her hair all purrty. I like mah hair free, just as it is. I ain’t gonna let it grow past mah shoulders though. I don’t wanna give dickheads an excuse ta call me a girl.
Hair Color: I reckon I’m gonna grow a few more grey hair if ya keep askin’ me these useless questions.
Eye Color: I really can’t tell. They look green sometimes and grey some other times. Is grey-green a colour?
Scars: I still got scars from the time I got stabbed in the chest a bunch. I can’t even begin ta count the number-a-times I’ve been shot. Mah hands are blistered ta shit from all the hard work I do, unlike ya lazy piece of a dung heap. What?! How’d ya know about that birthmark?! If ya tell anyone where it’s at, I’ll fill ya fulla lead.


Clothing and Accessories:
I like ta keep mah brown jacket on cuz it’s got nice, deep pockets. Work pants are good too - I can work real comfortable in ‘em. No. I only wear shirts in shades of red. It ain’t none-a-yer business why. What’s yer problem with mah cloak? It might be gettin’ ripped up, but it’s done right by me fer years.

I ain’t got mah guns on me right now, but, I keep ‘em in these here holsters - which I like ta keep low towards the knees cuz I’m quicker on the draw there. I call mah purrty revolver twins “Fly” and “One Day”. Why? Cuz it sounds nice.


Detailed Description:
As ye can see, mah skin gets real brown under the sun. I work hard all day long, and I got the muscles ta show fer it. Ya wanna see? Fine then - ain’t like I give a damn. I got some busted up knees though. Huh? I ain’t no rent boy. Fuck off. Mah knees are shredded from all the roofs I’ve fixed.

Main Traits: Whimsical, Unpredictable, Comical, Flexible, Non-committal Commitments are fer losers who don’t wanna live life ta the fullest.
Likes: Fun-livin', Explorin', Workin' new jobs, Guns, Freedom, Self-preservation Don’t judge me, ya barnacle-sucker.
Dislikes: Commitments, Foolhardy bravery, Selflessness, Haughtiness, Ill-humored folk I ain’t likin’ yer annoyin’ ass much either.
Unique laugh: Buhahahaha! Why do ya wanna know?
Hometown: Flevance What disease? I ain’t got no disease.
Personality:
I’m a whimsical man. I like ta be unpredictable cuz I like ta see the look of surprise on yer face. Bein’ consistent with how I behave gets borin' real fast. Who said I have an unstable and erratic psyche? Well yeah, I sure did move around a lot from orphanage ta orphanage when I was a kid, but that don’t mean nothin’.

Ya know, I don’t like foolhardy and selflessly brave punks. I like ta take care of mahself. Self-preservation is most important. Though that don’t mean I don’t take risks erry now and then. Just cuz I love mah life don’t mean I don’t enjoy a good rush or a fun adventure. You just ain’t gonna see me go on suicide missions. But, when I’m livin’ fer the rush, I get a bit wild and folk get hurt. Yer lucky I ain’t livin’ on the edge right now or I mighta shot ya fer askin’ so many questions. Just kiddin’, I ain’t no criminal. I like moneh, but I also like ta come by it earnestly. I work hard doin’ odd jobs and goin’ after bounties ta earn. Bounty huntin’? Naw, I ain’t no do-gooder. It just pays nice sometimes. I could be goin’ after higher bounties, but they ain’t worth the effort that comes wit’ chasin’ ‘em down.

Unwanted yet precious:
"The value of people is a fistful of berries."
Mah name is Butch Francis Castle. I was born ta a mama and papa I never came ta know. The only two things mah folks left me with was mah name and mah life. Mah early boyhood was spent at a fancy orphanage on the edge of the White City of Flevance; “Bright Stars’ Salvation”, they called it, I think. I don’t remember the place mahself, but I was told when I was a tad older what had happened ta it. We was celebratin' mah fourth birthday there—mah made up one, no one knows mah real one—and the candles on the birthday cake somehow burnt the place ta the ground. No one wanted ta rebuild the orphanage cuz the old patron was already dead or somethin’, so us kids got shipped off ta other orphanages.

I was the only one of us kids who got shipped off ta another island. A priest who was passin’ by adopted me and took me ta Spider Miles. This cunt of a priest was no good. He sold me ta an orphanage that was more of a factory where they worked the kids ta a pulp. Spider Miles was—and probably still is—a shit town fulla trash in the form of both people and things. Sure, it made me a trashy brat too. The orphanage barely fed us kids and trained us ta slave away fer the many factories that it lent its services to.

Livin’ there fer a few years, I was told by an older kid who was also once at the Bright Stars’ Salvation that I was a “cursed child” who’d ruined the lives of all the other kids there. That brat was an idjit.

Not everyone is special:
"A few berries more don’t mean shit."
Despite mah dismal causalities, I came ta value mah life even more—but I did come ta hate everythin' else. Slavin’ away at Spider Miles, I did benefit some. Mah body became much more resilient. I learned all sorts of menial labour, which helps a ton when workin’ odd jobs. Livin’ with filthy scum fer people did also teach me ta fight.

Things at Spider Miles calmed down after the silver-haired bounty hunter came ta town and massacred the city’s biggest players. He looked so fuckin' cool that I decided then and there ta become a bounty hunter when I was grown up. After the massacre, I kept workin’ fer the orphanage fer a few more years. The new patron was kind—as kind as folk could be in hell. He had us educated and better fed. In three years, I had more learnin' crammed inta me than most eleven-year-olds would know what ta do with.

Despite the nicer circumstances of the orphanage, I decided ta skip town by sealin' mahself inta a shipment bound fer the South Blue. It was, by far, the worst idea I ever had in my life. I didn’t realize how long it’d take ta get ta the next port. By the time they opened up the box and found me in there, I was so skinny, I could dodge rain. It took me over a year to gain the weight back. In the South Blue, I kept bein’ moved from one orphanage ta another again. I learned some more trades in those years until an ol’ gunslinger by the name o' Flint Westwood found me.

Westwood took me in and taught me how ta shoot. The old man was a gunsmith in his cranky years and taught me some-a-his craft too. These here revolvers I keep? I made them mahself—with a little help from the geezer. But, after a while wit’ him, I was gettin’ tired of livin’ in one place. One day, I found a bounty poster of a small-fry and decided ta start mah dream career. I ditched the wrinkly cod and took off; never even said goodbye. And now here I am, after two years, talkin' ta ya like ya care.