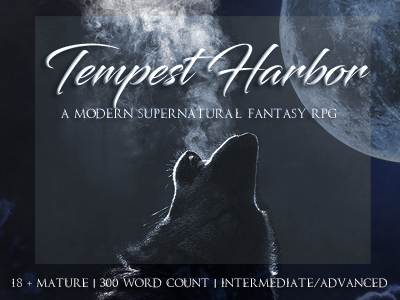 A small city in Massachusetts, Tempest Harbor has found itself at the epicenter of supernatural living for quite some time. With a brewing war between two werewolf packs, the unsettled vampire community, and two witch heirs that are coming into their own as leaders, much remains distressed within the harbor. As tourist season comes and goes, the supernaturals see an ever occurring flux and wane with their population, although this season, their population took an even greater hit. The joining of forces is needed as a new extermination organization has started to infiltrate their haven. But with their own mess of problems, who will look at the looming threat on the horizon?

Tempest Harbor is a modern supernatural fantasy roleplay for mature players (18 years and older). With two application forms, 6 species to choose from, and a welcoming community, all are welcome to join us.