Hair Style: Varies depending on her mood and decisions
Hair Color: Varies depending on her mood and decisions
Eye Color: Hazel colored eyes (changes to amber under certain conditions) with octopus style pupils.
Scars: None
Clothing and Accessories: Laguna's clothing tends to vary depending on the climate she is in, usually dressed overly warm or overly cool with things like simple shorts and a top with sandals in hot weather, or an oversized parka in cold weather. Though she almost always has on special polymer stretching latex shorts and tube top. Sometimes she can be found in the same material worn on her legs in the form of stirrup stockings, and fingerless elbow length gloves.

Description: Laguna is a lithe girl with varying hair styles and colors thanks to the chromatophores in her body due to her mimic octopus heritage, allowing her to freely change up her hair for aesthetic purposes. With a tentacle like texture, her hair is quite odd. Her body tends to shift a little as well in terms of weight and size whenever she utilizes her ink for combat, shrinking back to normal after the fact.

Hometown: An island that used to be known as Homestead, an island that advocated a great deal of cross species integration and community, Homestead was renamed to Dead Scar Island after a savage war between three pirate parties had occurred. Between the three pirate parties, the island had a third of its landscape turned to crisp ash and desolate wasteland.
Personality: Laguna can be best described as selectively manic. From having been plucked up at a young age from a scene of tragedy, by a sorrowful partial culprit of the incident no less, and having seen her family burnt before her, is it any wonder why Laguna tends to act pensive, dismissive or just glum about most things.  Whether it's the posh princess style of dismissing those under her, or the casual trunsdere attitude toward those that she has an interest in being with, Laguna cannot help but be somewhat emotionless or put off by those that she does not approve of. The way she acts with those she detests and those she likes is two very different forms of 'dislike'.
Though this easily melts away when she gets her freedom, excited and going in to a hyper active state to get to spread her art, or just getting to stretch her legs.  She's more than happy to express how she really feels with a smile on her face (though she tends to express the truth when putting on her cold persona).  She's a very truthful girl, who will point out plans and secrets because she's just not a fan of leaving anyone in the dark, this has lead to her being kept quiet more often than not by her adoptive father.
When it comes to fighting, she always comments on how troublesome a fight is, and that she'd rather just get it over so she can paint her spark of inspiration from the thrill of a fight, making her priorities clearly known.

History:
For whatever short time she did, Laguna grew up on Homestead, an island aptly named for families to make a home on it, an island known for being a big community, a melting pot, a center of multi species get along happy go lucky koombayuh hullabaloo! Things can't be as great as they are forever. Now, even if they are as great as they seem, tragedy always hits. The tragedy in this case, was a war. A war that didn't even involve the people of Homestead.
Three warring pirate crews encountered each other on the sea, trying to use land coverage to protect from cannon fire, and eventually docking at three points of the island, the war had spread and razed a mass piece of the land. Towns were leveled, forests were stripped, resources were lost forever. Lives were taken. People were hurt. Others enslaved. One was saved though. You see, after the entire war had finally died down, one person had come across Laguna, someone who was believed to be a five hundred year old pirate. Considered to be an unofficial Shichibukai from the propaganda produced by the marines, Laguna would be taken in by the man known as Cadmius Asmodeous, better known as the Dread Pirate Cad.
From being taken at nearly six years old, Laguna would spend a large amount of time being trained and raised by Cadmius, someone who, wanted to retire and give the name of Dread Pirate to Laguna. As it turned out, no one can live for hundreds of years. It was all one clever ruse by the original DP. The man had wanted his legend to live on, but, knowing he couldn't devised the strategy to simply train the cabin boy in to first mate material, pass on the mantle over time, and hire a new crew when the time was right, with the study becoming the new boss of the boat.
This would go on for generations, eventually, the world government catching with through their Cipher Pol, and giving leniency toward this crew so long as they kept the legend alive, to terrify other pirates. Well, Laguna is now a part of that great tradition, and she plans to break loose and live her life that was taken from her at the age of six. She has plenty of time to catch up on after all.

Looking forward to seeing where Laguna finds her place~ 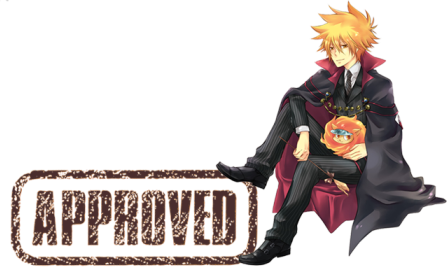