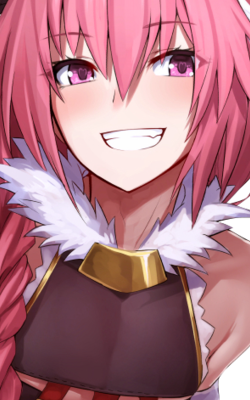 Hair Style: Long with braided portions.
Hair Color: Pink and white.
Eye Color: Violet
Scars: None
Clothing and Accessories: He is known to wear a flowing white cloak over what appears to be typical light armor that anyone could acquire from a blacksmith or store catering to those whom adventure. He wears pins in his hair and has on boots that look like modern day uggs. He always has on white gloves and numerous belt attachments all over his body that keep him looking fly. The color coordination of his outfit happens to be dark red and a cream colored off white.

Description: Despite having a small, slim feminine body frame while in his armor, he is actually ripped to shit once the armor is taken off or damaged. Showcasing a finely chiseled and well designed musculature that makes it appear as though he works out all the time. He has a youthful and refined feminine face that makes many onlookers confuse him as a female and his vocal cords make him soft spoken, with a sultry female-like speech pattern.

Hometown: Peach Star Island [East Blue]
Personality: He is known for his big mouth and even bigger ego, to the point in which he has showcased across numerous events in his life that he is completely unflappable. In the face of insurmountable danger he finds himself rallying forth with positivity.